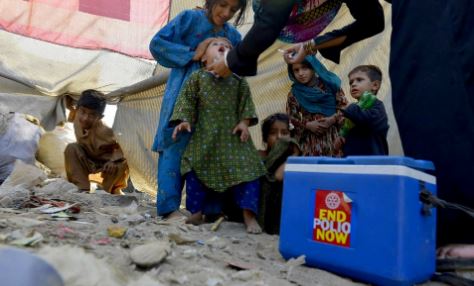 Unicef’s Regional Director for South Asia George Laryea-Adjei on Sunday said the polio programme in Pakistan was back on track, expressing hope that the crippling disease will be eradicated from the country by the end of 2023 following effective measures to check its spread.

After staying polio-free for almost 15 months, Paki­stan reported a polio case in April. The country detected only one case last year.

Polio is a highly infectious disease caused by poliovirus and mainly affects children aged under five years. It enters the nervous system and causes paralysis and even death. While there is no cure, vaccination is the most effective way to protect children from this crippling disease.

Adjei said the current data suggested that the virus was now under control in the country.

“We are using all available resources and services at our disposal to reach every girl and boy in Pakistan with lifesaving vaccines and protect them against the entirely preventable disease,” he said.

Appreciating the efforts of over 350,000 health workers travelling to every part of the country to administer doses of the vaccine to every child, he said, “the programme is back on track to stop all wild poliovirus transmission in 2023.”

Adjei added that Pakistan was in a much better position today to eradicate polio than a year ago. However, he said there were challenges that hampered the efforts to eliminate the virus completely.

He expressed concern over the attacks on polio and health workers in some parts of Pakistan and lauded the courage of polio teams.

The Unicef official also appreciated efforts of the government’s polio eradication endeavours, recalling that Pakistan was the first country to launch an ambitious programme for training its health workers to support national immunisation programmes.

Highlighting the challenges, he said the “onslaught of back-to-back disasters” — drought, heatwaves, floods, and acts of violence — continued to put millions of children’s lives at risk in Pakistan.

Ajei said the recent catastrophic floods destroyed vital health facilities and exacerbated health risks for millions of children, especially those living in districts historically at the highest risk for polio.

The Unicef director said the agency had been working with the government, UN agencies, and NGO partners from day one of the floods to respond to the needs of the most vulnerable children and families, in 54 of the 90 calamity-hit districts.

In the health sector, he said 110 mobile health teams were providing critical health services to children, women, and adolescents and Unicef was also assisting the national measles and rubella vaccination campaigns for children under the age of five in flood-affected districts.

Moreover, Unicef was working on water, sanitation, and hygiene in the flood-affected areas as well, he added.

“We are delivering over two million litres of safe drinking water to the flood-affected communities,” Adjei said.

Highlighting his organisation’s endeavours, Adjei said the agency established over 600 temporary learning centres to provide safe spaces for children to learn and play in the education centres.

Divulging details of Unicef’s activities in northern Pakistan at the outset of winters, he said the agency procured 16,000 warm clothing kits for children up to 12 years of age which were being dispatched for distribution in snowbound areas of Balochistan, Khyber Pakhtunkhwa and Gilgit Baltistan.

Moreover, around 15,000 blankets were distributed in KP and Balochistan, he added.

Referring to the impact of climate change, he said, “The impact is profound throughout South Asia and in 2022 alone, climate-induced floods in Pakistan, Bangladesh, northern India, and Afghanistan left over 15 million boys and girls in need of assistance.”

He pointed out that summers were getting hotter, glaciers melting, sea levels rising, and landslides sweeping away homes and schools.

The regional director said Pakistan was already a “climate hotspot” before the current emergency broke out.

According to Unicef’s Children’s Climate Risk Index, children in Pakistan were at “extremely high risk” of the impacts of climate change, ranking 14th out of 163 countries and regions.

Since April, Pakistan has been hit by a series of extreme weather events. There was no spring this year, with the country going from winter directly into a scorching summer. Temperatures reached over 50 degrees Celsius in some areas of the country followed by catastrophic floods.

He said these reoccurring and escalating climate catastrophes were “directly threatening” children’s lives and destroying infrastructure critical to their well-being.

First and foremost, global leaders must urgently limit global heating to 1.5°C as this was the only way to save children’s lives, the Unicef official suggested.

“We must prepare children to live in a climate-changed world through climate change education and green skills training,” Adjei concluded.

As Pakistan strives to become polio-free, the region of southern KP threatens to upend the progress, with this year’s 13th case reported in July.

In August, environmental samples from seven cities returned positive, indicating the presence of the virus in major urban centres.