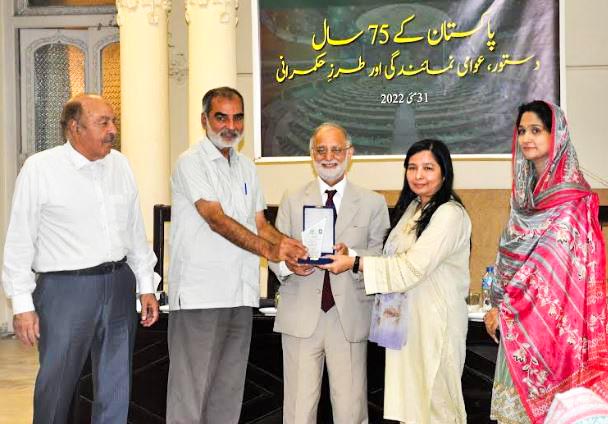 Rawalpindi/Islamabad, JUN 1 /DNA/ – The Constitution of Pakistan has not only been the embodiment of national consensus since the time of its inception but has also served as a binding factor during times of political instability and turmoil. The vision, comprehensiveness, and balance of power provided in the Constitution have enabled it to steer the nation through military rules and political challenges.

These observations were made by speakers at a seminar titled ‘75 years of Pakistan: Constitution, Public Representation and Governance System’, which was organized by the Institute of Policy Studies, Islamabad in collaboration with the Department of Law, Fatima Jinnah Women University (FJWU) at the latter’s campus in Rawalpindi.

The speakers observed that Pakistan is making constant progress in ensuring supremacy of the Constitution and the crises that sometimes hamper smooth movement on this path are temporary obstructions faced by all nations of the world at one time or another. This should not be a matter of apprehension, however, introspection is essential in order to pinpoint where the nation has gone wrong and a system needs to be put in place to respond to the issue in an appropriate manner. It was suggested that a part of this initiative could be in the form of a center for study of constitutional issues that would help in generating expert opinions and fulfil the need for unbiased debate and research on the Constitution.
Pakistan is nearing the milestone of 75 years of its existence. The common thread during these years regarding the Constitution, public representation and governance system is a constant struggle, right from the creation of Pakistan to the formulation of the Constitution. The Constitution of 1973 has undergone various changes in the form of amendments which have, in fact, improved its subject matter.
The speakers said that the Parliament upheld and restored the original spirit of the Constitution with another act of national consensus through the 18th constitutional amendment and keeps on emphasizing it through important amendments. Most of the unpopular changes brought about in the Constitution by military regimes have been done away with. The role of the higher judiciary, however, needs careful calibration as it has evidently expanded its reach beyond its desired responsibility through its powers to interpret the supreme law. A constitutionalism debate is vital to review the role of the judiciary, they added.
They were of the view that political instability has been the root cause of all the issues that the country has been facing. The country can progress unhindered if stability is brought into this domain. In this regard, they suggested striking a balance among the legislative, executive and judiciary. The Constitution has been suspended and amended many times but it faces no threat as long as trust is placed in the Parliament to fulfil its role.
The concept of Riasat-e-Madinah was part of the recent political debate though how sincere were the motivators of this deliberation is a moot point. However, this can be a reference point for a detailed guidance for the system of governance for the country, they said.
Martial laws have been imposed on the country a number of times, however, all of the initiators had to seek some form of public representation after some years. Ayub Khan had to resort to local democracy, Zia-ul-Haq had to conduct a referendum to provide the impression that he was a representative of the people, even Pervez Musharraf had to turn to local bodies elections and a referendum.