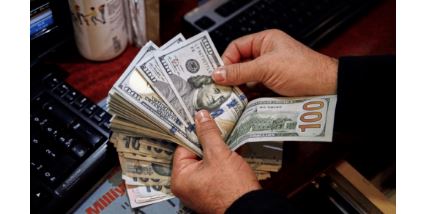 ISLAMABAD: The dollar continued its relentless upward march against the rupee on Monday with the greenback gaining Rs5 in interbank trade. According to the Forex Association of Pakistan, the dollar was trading at a record Rs216 against the local currency at 3:12pm, up Rs5, or 2.4 per cent, from Friday’s close.

However, the strength gained by the rupee after $2.3 billion Chinese inflows evaporated within a couple of weeks, as the dollar snapped the rupee’s rising streak and gained Rs2.38 in the interbank market on July 5, the first appreciation in the new fiscal year.

Since then, the greenback has continued to rise with a slight reversal of the trend on July 15 — the day the IMF announced it had reached a staff-level agreement with the government. However, the rupee reversed its gains the very next day with analysts attributing it to low inflows and import payments.

The PTI routed the PML-N by winning at least 15 seats in the crucial by-elections, which means that incumbent Punjab Chief Minister Hamza Shehbaz will likely be unable to show the simple majority needed to remain the chief executive in the re-election scheduled for July 22.

Naseer said that the results of the by-polls had raised concerns about the future of the coalition government in the centre and thus, created political uncertainty.

“The rupee is under pressure as the market is uncertain about the new setup and the decisions it will take to stabilise the economy, especially the fate of bilateral inflows currently being negotiated by the current finance minister.”

Analyst Komal Mansoor said the rupee had nosedived because of yesterday’s political events.

“The PTI’s win has cast doubt on the sustainability of the current government and the sentiment has again turned negative,” she said.

She predicted that the rupee would have a “rollercoaster ride this week” until the central bank steps in.

He noted that the government and the International Monetary Fund (IMF) had reached an agreement, oil prices had dropped internationally and the interest rate hiked, which meant that people would be interested in the rupee rather than the dollar.

“The dollar should have dropped [in price] because of this and people should have gone towards bank deposits. We believe the dollar is rising because of the government’s [complacency] since the government or other state institutions do not appear to be concerned and it seems like they are fulfilling some target given to them by the IMF.”

Paracha also shared apprehensions that foreign investors were reluctant to invest in the country because they had “no idea” how high the dollar would rise, while the growth rate of remittances had dropped because overseas Pakistanis were “unhappy”.

Political uncertainty breeds economic instability, he said and called for general elections to be announced to “kill this uncertainty”.

PTI secretary general Asad Umar, who also had a brief stint as the country’s finance minister during the party’s time in government, shared similar views.

“This political uncertainty is bleeding the economy and inflicting tremendous pain on the people,” he tweeted.

He termed the incumbent government a “badly conceived and badly executed experiment” and demanded an end to it.

“Pakistan cannot be made to suffer any more for poor decisions,” he added.