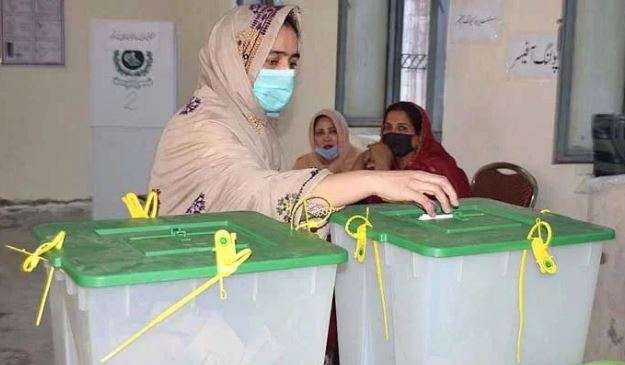 LAHORE, OCT 16: Pakistan witnessed intense political activity as the polling for the crucial by-elections on eight National Assembly, and three Punjab Assemblyentered the final stage, with reports of sporadic clashes in different constituencies.

The by-poll on NA 45, a tribal area seat, has been postponed over law and order situation.

The lower house seats were vacated after NA Speaker Raja Pervaiz Ashraf had accepted the resignations of PTI MNAs — nine on general seats and two on reserved seats for women.

PTI Chairman Imran Khan is contesting on seven out of eight NA seats.

As the polling process started, Khan urged the people in the constituencies where the by-election is being held to come out in large numbers to vote.

“This is a referendum for Haqiqi Azadi from the cabal of crooks. We are contesting against all of PDM, the Election Commission and ‘namaloom afraad’,” he said in a tweet.

On the other hand, Prime Minister Shehbaz Sharif asked the voters to decide wisely about who they are voting for as the “development and welfare of your country depends on it”.

He also urged the people to participate fully in the polling.

“This [by-polls] is a constitutional and legal process and only people have the right to elect who they want,” he wrote on Twitter.

Meanwhile, reports of sporadic clashes and other incidents involving PTI and Awami National Party marring peaceful by-polls were received during polling at different constituencies across the country.

PTI Karachi President Bilal Ghaffar suffered a nasal fracture after he was attacked during the voting process at one of the polling stations in Karachi’s Malir.

PTI leader Jamal Siddiqi accused PPP’s Saleem Baloch of attacking Ghaffar in Bakra Piri area in Malir. He alleged that over two dozen men attacked Ghaffar with bricks when he went to inpect a polling station near Bakra Piri, leaving him “seriously injured.”

Meanwhile, PTI spokesperson also confirmed the attack and said he was being treated at a nearby hospital.

Responding to the matter, Bilour said that a worker had made the video which she shared on social media. She said that she wasn’t aware that making or posting such a video is a violation of ECP code.

“I deleted the video when I got to know about the ECP rules,” Bilour said.

In Punjab, the polling process at a poling station in NA-157, Sardar Pur area of Multan was stopped as the workers of two political parties engaged in a quarrel following allegations of rigging.

However, the polling was resumed soon after.

Meanwhile, PTI leader Farrukh Habib levelled allegations of difference in the voters list available with the presiding officer and those provided to the candidates. He claimed that the presiding officer’s list did not include the names of PTI voters but list with these names were provided after the party workers protested.

Individuals interfering in polling process to be held: CEC

Chief Election Commissioner (CEC) Sikander Sultan Raja has ordered the authorities to immediately arrest the individials involved in rioting and interfering in the polling process.

“Any government official if found involved in rigging will be arrested right awat and no liniency will be shown to him,” CEC Raja said while directing the authorities concerned to ensure peaceful voting.

He also urged the people to come out to vote without any fear.

Spokesperson of election commission said that Raja is personally monitoring the polling process which will continue without interval till 5pm.

The by-polls are the latest twist in political wrangling that began after Khan’s April 10 ouster via a parliamentary no-confidence vote — making him the first prime minister to be voted out of office.

Candidates can stand for multiple seats in elections. If they win more than one, they choose which to keep, and a separate vote must later be held for those forfeited.

The by-elections come as the nation grapples with the aftermath of devastating monsoon floods that affected more than 30 million people and left a third of the country under water.