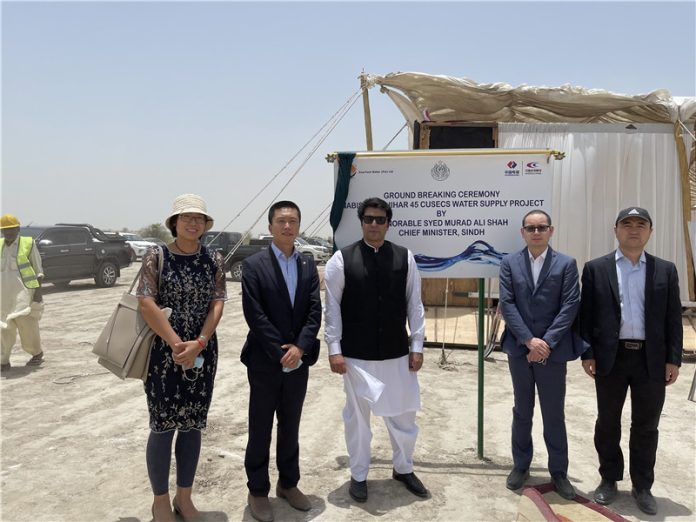 The ground-breaking ceremony of the project was jointly performed by Murad Ali Shah, Chief Minister of Sindh Province and Abdullah Al-Mutairi, CEO of the project investor Enertech Holdings.

The company will install and test the glass reinforced plastic pipes with a diameter of 1.4 meters and a total length of 60.71km.

“Although the project has complex groundwater treatment requirements for the reservoir, we firmly believe that our technical competence and service can satisfy both the owner and the local people,” Mr. Wu, Project Manager of the Nabisar Vajihar project, said in an interview with Gwadar Pro.

“Our end point, Vajihar in the Thar region, is a desert area with an arid climate and sparse population. This project will effectively solve the over-exploitation of groundwater to improve the local ecological environment for Vajihar side,” emphasized Wu.

Besides, the project will also create job opportunities during the operation and maintenance phase once the project construction phase is completed,” Wu told Gwadar Pro. “Given the local situation of economic development, our CSR also include vocational training for local people, providing opportunities to boost overall industrial chain development.”

The Nabisar Vajihar project is not only the first project of POWERCHINA to enter local water sector based on the deep cultivation of hydropower, thermal power and new energy markets in Pakistan, but also the first project of tripartite cooperation between China, Pakistan and Kuwait in recent years, with self-evident significance to the diversified energy cooperation under the framework of the China-Pakistan Economic Corridor and the Belt and Road Initiative.