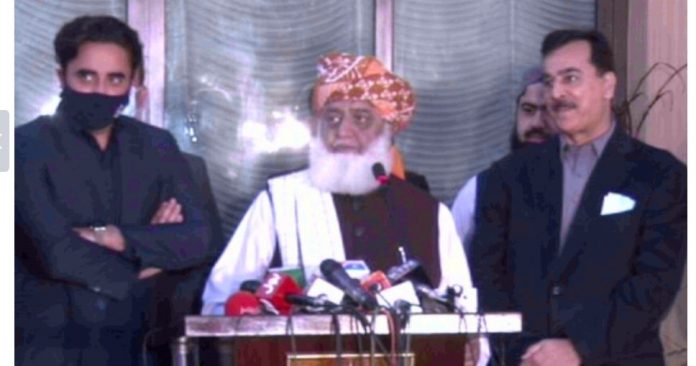 ISLAMABAD, FEB 28 – PPP chairman Bilawal Bhutto-Zardari said on Sunday that the opposition’s 10-party alliance, Pakistan Democratic Movement (PDM), is prepared for both open and secret balloting in the upcoming Senate polls, amid the government’s push to introduce legislation for a show of hands during voting.

The PPP chairman was speaking to the media in Islamabad along with PDM chief Maulana Fazlur Rehman and PPP leader Yousuf Raza Gilani a day before the Supreme Court is expected to issue its opinion on the presidential reference seeking the apex court’s view on holding Senate elections through open ballot.

The opinion will be announced in the open court by a five-member bench headed by Chief Justice of Pakistan Gulzar Ahmed at 9am on Monday. The top court reserved its opinion on the issue on Thursday after concluding the arguments.

Bilawal, in today’s media talk, said that he hoped that the SC’s opinion will be “in accordance with the law and the Constitution”, adding that the secret ballot enjoyed “constitutional protection” whether in the Senate elections or the general elections.

He said that in the upcoming Senate polls, the opposition alliance wanted to show that “even members of parliament are not with the government but with the PDM”, and expressed hope that the opposition’s candidates would be elected with “good and surprising results”.

Rehman echoed Bilawal’s thoughts and noted there was “an atmosphere of disappointment to be seen in the ranks of the government”.

“Hopefully good results will come out,” the JUI-F chief said.

“[This] will give power to every movement, march and move of ours and we will be successful in our goal and mission of sending this puppet government and prime minister [back] home,” said Bilawal.

The PDM hoped to establish a national government, insisted Bilawal, which would represent the people and solve their problems while institutions worked within their sphere, and the parliament took decisions about the country’s future and fate.

Rehman said the PDM’s unity in the four provinces was “good news for the nation” and the alliance would be contesting the Senate elections according to a mutually agreed plan of action. “The different parties of the PDM did not break each other’s votes as they (the government) thought. We are united for the Senate elections and will achieve successful results.”

The JUI-F chief clarified that the PDM was a movement and not an electoral alliance even though they “personally try not to break away each others’ [votes] and try to contest the elections together”. He said that PDM members can decide to contest elections separately due to “special circumstances” — referring to the Awami National Party contesting its own candidate in the Nowshera (PK-63) by-poll.

‘More power in that demand’

In response to a question regarding an alliance with MQM-Pakistan, Bilawal said that he hoped the MQM-P “will be with us”.

He pointed out that MQM-P — an ally of the PTI government — had been elected from Karachi which had been “abandoned” by the federal government.

“We think that they are asking the government for Karachi’s rights [but] there will be more power in that demand [if raised] from the PDM or the opposition’s platform.”

Bilawal admitted that the PDM had been in contact with MQM-P as well as other members of the treasury benches, adding that they had a free vote and there was “no limitation on government MNAs or allies to support [only] the government in the Senate elections”.

Separately, Sindh Education Minister Saeed Ghani also confirmed that a delegation of his party had visited the MQM-P to request them to vote for the PPP’s nominees in the Senate elections. He said the MQM-P would have a “political advantage” in securing technocrat and women’s seats in Sindh if they supported the PPP.