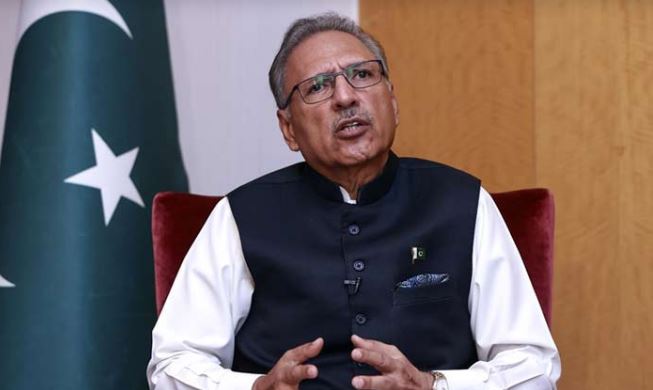 LAHORE, NOV 13 (DNA) — President Dr Arif Alvi has said all stakeholders might sit together and make a decision about a mutually agreed date for the next general elections.

Speaking in Lahore, the president hoped that such an approach would help reduce the political temperature in the country. “The stakeholders should also consider discussing the use of technology to bring efficiency, transparency and fairness in elections,” Dr Alvi told reporters, according to a press release.

The president said he would continue his efforts toward reducing the political polarisation, adding that his efforts had made some impact towards reducing the distance from extreme positions to some extent.

Reports earlier suggested that the president mediated between Imran Khan and the establishment to lessen tension. However, the mediation has not yet yielded results.

“I had been and am still trying to bring stakeholders together on one table and resolve their differences by democratic means of discussion, consultation and deliberation to find mutually agreed upon solutions on major issues and matters to reduce the political polarisation in the greater national interest,” Dr Alvi said.

The president maintained that efforts had been made and would continue to be made within the framework of the constitution and laws of the land for bringing political stability in the country.

He said the country required strong and effective institutions and every endeavour should be made for strengthening them and enabling them to perform their respective functions in accordance with the constitution.

He further said that issues like inflation, economy, improving service delivery and reducing political polarization were pressing issues which, in his opinion, needed to be addressed on priority.

Replying to a question, the president said that Arshad Sharif had sent him a letter about threats to his life and he forwarded that letter along with his comments to the prime minister. =DNA