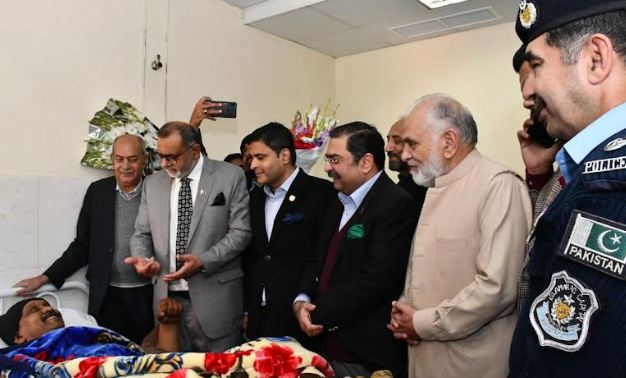 ISLAMABAD, DEC 27 /DNA/  – Ahsan Zafar Bakhtawari President, Islamabad Chamber of Commerce and Industry along with a delegation visited Pakistan Institute of Medical Sciences (PIMS) to enquire about the health of ASI Hassan Raza and Constable Muhammad Hanif who got injured during a suicide blast in I-10/4, Islamabad on last Friday in which one policeman was also martyred. Engr. Muhammad Azhar ul Islam Zafar Vice President ICCI, Khalid Chaudhry former Senior Vice President, Saif ur Rehman Khan former Vice President, Dildar Abbasi, Zareef Khan and others were in the delegation. Addl/SP (Ops) Iqbal Khan was also present at the occasion

Ahsan Zafar Bakhtawari paid tributes to the courage and valour of the injured police personnel who endangered their lives to save the city from any big catastrophe. He said that the business community and the citizens feel proud over the excellent performance of police personnel who are ever ready to sacrifice their lives in the line of their duty to protect others. He said that the role of such police persons creates a sense of confidence in the business community and the citizens.

ICCI President said the Islamabad police has issued a special plan to introduce 25 temporary check posts in the city for enhancing security measures. However, he said that the coverage of safe city cameras should be further increased in the federal capital to boost the security situation in the federal capital. He said that Pakistan needs a peaceful environment to promote business and investment activities for which taking measures to further improve security is the key requirement. He assured that the business community will always cooperate with the police force in its endeavours to further improve the security situation in the city.

Engr. Muhammad Azhar ul Islam Zafar, Vice President ICCI also appreciated the bravery and courage of injured police personnel and said that their commitment towards their duty is highly appreciable. He said that such brave police persons are a source of pride for the nation.

Addl/SP (Ops) Iqbal Khan thanked the ICCI delegation for visiting PIMS to enquire about the health of injured police personnel, which was a source of encouragement for them.