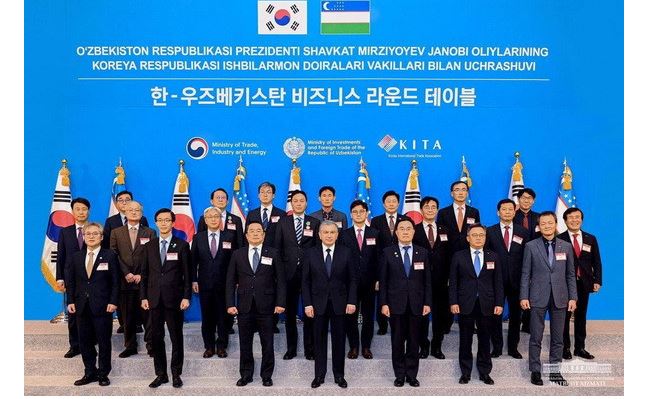 The event was attended by the Minister of Trade, Industry and Energy of the Republic of Korea Moon Seung Wook, Chairman of the Korea International Trade Association Christopher Ku, heads of the Eximbank of Korea, the Korea International Cooperation Agency (KOICA), SK Ecoplant, Posco, Samsung , SK Nexilis, Youngone, KIA Motors, K-water, KT-Net and many others.

It has become a tradition to hold such meetings during foreign visits. Thus, a large-scale business forum was held as part of the state visit of the President of Uzbekistan to the Republic of Korea in 2017. And in 2019, the heads of state took part in a joint business forum in Tashkent. As a result of these events, trust between business people was strengthened, trade, economic and investment partnerships became more active. As a result, many projects have been launched. The expansion of interaction is also facilitated by serious changes in the introduction of market mechanisms in all sectors of the economy in our country. Barriers that hindered the development of joint business have been removed.

“The started transformations in our country are irreversible,” said Shavkat Mirziyoyev. – The Development Strategy of New Uzbekistan envisages the continuation of work on creating the most favorable conditions for entrepreneurs, expanding the presence of foreign business in our country. We value and value stable, trusting and dynamically developing cooperation with the Republic of Korea, a reliable friend and special strategic partner of Uzbekistan.

Systemic interaction has been built between the two states, including in the trade, economic and investment spheres. There is a special working group. Within the structure of the Ministry of Investment and Foreign Trade of Uzbekistan, a department has been created that is responsible for the development of bilateral cooperation with the Republic of Korea.

Thanks to this attention and systematic work in recent years, relations between the two countries have reached an unprecedented new level. Trade turnover doubled and amounted to US$2.2 billion. The volume of accumulated direct Korean investments in the economy of Uzbekistan exceeded US$7 billion. Over the past five years, the number of enterprises with Korean capital in our country has doubled. Today there are more than a thousand of them. Together with Korean companies, 52 investment projects are being implemented in Uzbekistan for a total amount of more than US$9 billion.

Representatives of the business circles of South Korea highly appreciated the conditions for active business created in Uzbekistan and expressed great interest in the development of investment cooperation.

The meeting discussed the implementation of 40 new projects with Korean companies totaling more than US$5 billion in areas such as digitalization, green energy, mechanical engineering, agriculture, textile industry, pharmaceuticals, geology and many other areas.

President Shavkat Mirziyoyev approved these plans, instructed the responsible persons to develop and adopt an appropriate “Roadmap” with the definition of specific terms.

The head of state invited the heads of Korean companies to visit Uzbekistan and take advantage of the favorable conditions created for foreign investors.

This concludes the state visit of the President of Uzbekistan to the Republic of Korea, the head of our state left for Tashkent.