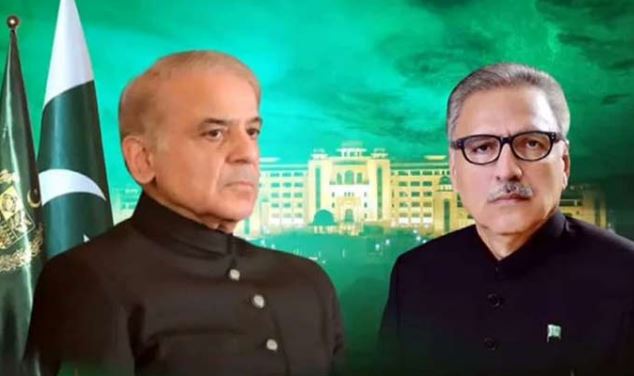 ISLAMABAD, AUG 2: President Dr Arif Alvi and Prime Minister Shehbaz Sharif on Tuesday telephoned Chief of Army Staff (COAS) General Qamar Javed Bajwa and expressed their deep grief and sorrow over the martyrdom of military officers and soldiers who were martyred in a helicopter crash in Balochistan.

He prayed for the highest rank and also expressed sympathies with the bereaved families.

Dr Alvi while paying tribute to the martyrs  services for the country and the nation said that the sons of the nation were engaged in relief work related to floods in Balochistan and they performed their duty and worked very hard to serve the nation.

They martyred while performing their duties and serving the nation with great zeal, hard work and dedication, he said.

During his conversation with the Army Chief, he also mentioned the meeting with Corps Commander Lt Gen Sarfraz Ali and the briefing given by him during his previous visit to Gwadar. The President said that during the briefing, he found him as a very capable, intelligent and dutiful officer.

The Prime Minister also commiserated with the bereaved families.

Earlier, in his Tweet, PM Shehbaz Sharif had expressed his deep grief and sorrow over shahadat of Corps Commander Quetta Lt. Gen. Sarfraz Ali and five other army officers and soldiers in an unfortunate helicopter accident in Lasbela.

While expressing his condolence and sympathies with the bereaved families, the prime minister said these sons of the soil were the pride of nation who laid down their lives while saving the countrymen trapped in floods in Balochistan province. He said the entire nation was grieving over the gloomy incident.