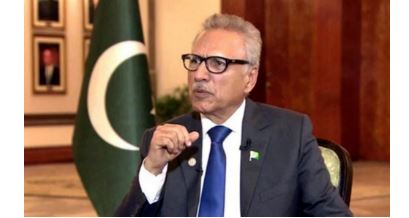 ISLAMABAD, JUN 4: President Dr Arif Alvi on Saturday returned two bills seeking to reverse the controversial changes made in the election laws by the previous PTI government regarding the use of electronic voting machines (EVMs) and i-voting for overseas Pakistanis and clipping the vast powers of the National Accountability Bureau (NAB), to the prime minister for “reconsideration and detailed deliberation by the parliament and its committee(s)”.

Both bills were passed by the National Assembly and the Senate last month. After their approval from both houses, only the president’s assent was required for them to become law.

However, President Alvi returned the bills today, saying that they had violated Article 46 of the Constitution, according to which the prime minister “shall keep the president informed on all matters of internal and foreign policy and on all legislative proposals the federal government intends to bring before Majlis-e-Shoora (parliament)”.

The president was not informed about the legislative proposals before bringing the bills to parliament, a statement from the President’s Secretariat said.