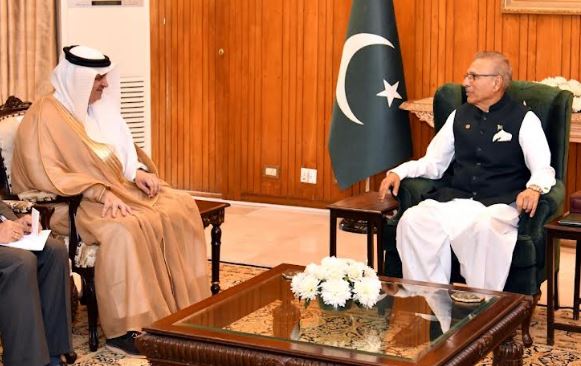 ISLAMABAD, SEP 30 /DNA/ – President Dr Arif Alvi has said that Pakistan and Saudi Arabia enjoyed long-standing fraternal ties rooted firmly in the common religion, shared values and culture and have stood by each other through thick and thin regardless of the changes in leadership. He stated that the people and the Government of Pakistan deeply appreciated the support provided by Saudi Arabia during difficult times especially the help provided by it during the recent catastrophic climate change-induced super floods in the country.

The President expressed these views while talking to the Ambassador of the Kingdom of Saudi Arabia (KSA), Mr Nawaf bin Saeed Ahmad Al Malikiy, who called on him, at Aiwan-e-Sadr, today.

The President said that Pakistan and Saudi Arabia had enjoyed close political ties over the years, however, both countries needed to take meaningful and effective steps to significantly increase the existing bilateral trade volume of US$ 4.6 billion in the year 2021-22 as it did not fully reflect the depth of bilateral relations between the two brotherly countries.

The President appreciated the role played by the Kingdom of Saudi Arabia in the Organization of Islamic Cooperation (OIC) to highlight the issues of Palestine and Kashmir as well as the matters related to Afghanistan.

While highlighting the colossal loss of lives, livestock and infrastructure, the President said that the devastating floods had affected more than 33 million people all across Pakistan, killed more than 1500 people, over 1 million livestock were lost, and damage to the economy was estimated around US$ 30 billion.

The President also highlighted the human rights violations in the Indian Illegally Occupied Jammu and Kashmir and expressed the hope that the international community would play its due role in ending these violations and urging India to agree to a peaceful resolution of the Jammu & Kashmir dispute in the light of various United Nations Security Council resolutions.