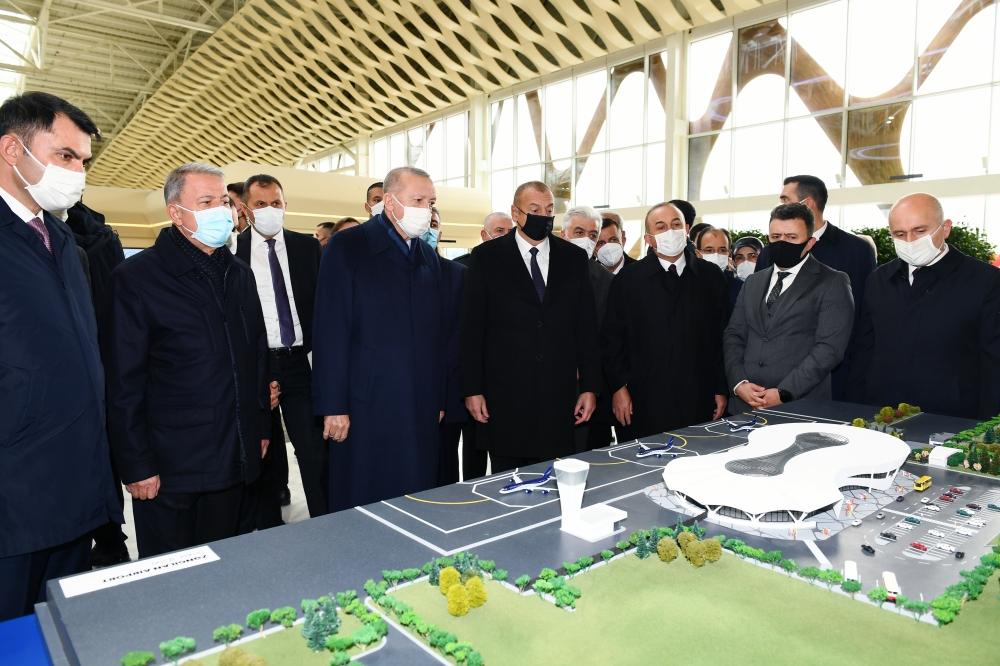 FUZULI: Turkey’s President RecepTayyipErdogan and his Azerbaijani counterpart on Tuesday jointly inaugurated a new airport in the area liberated from the Armenian occupation.

Erdogan is the first head of state to land at Fuzuli International Airport, Azerbaijan’s first airport in the area liberated from Armenia. This is the Turkish president’s third official visit to Nagorno-Karabakh’s since the region’s liberation last year.

The Turkish president and his Azerbaijani counterpart IlhamAliyev cut the ribbon to officially open the new airport, then toured the building and spoke with authorities.

The Turkish leader traveled to Azerbaijan for a one-day working visit at Aliyev’s invitation.

Erdogan also attended the groundbreaking ceremony of a highway in Fuzuli.

As a gesture of goodwill, Erdogan and Aliyev buried a handwritten note at the site.

“The foundation of the Horadiz-Jabrayil-Zangilan-Aghband highway (Zangezurcorridor ) was laid by Aliyev and Erdogan,” it said.

The Turkish president will also attend the groundbreaking ceremony of the Smart Agriculture Campus, which will be built in Zangilan with Turkey’s contributions.

During the visit, Turkey-Azerbaijan relations will be reviewed in all aspects, and initiatives to further deepen bilateral cooperation will be discussed.

Current regional and international developments, as well as bilateral relations, are also expected to be discussed in the meetings.

On Jan. 12, Aliyev laid the foundation stone for the airport, which has been completed in eight months and met the highest international standards. The first test flight at the airport was performed on August 22.

The airport’s runway is 3,000 meters (9,843 feet) long and 60 meters (197 feet) wide. Its terminal can serve 200 passengers per hour. All wide-body aircraft, including large cargo planes, will be able to land and take off easily at the airport.

Turkish companies also contributed to the airport’s construction, which is equipped with automated systems and a control tower that meets international civil aviation and transportation standards.