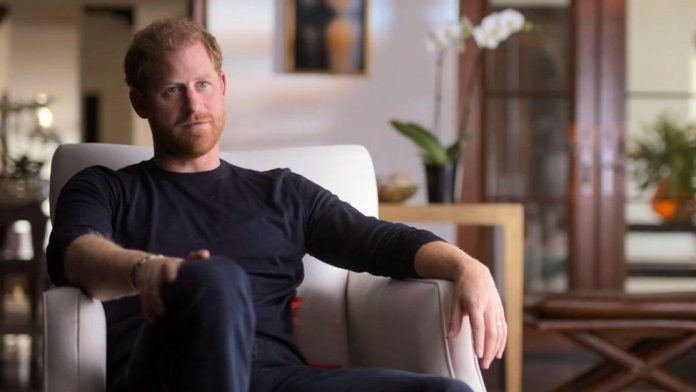 Prince Harry has claimed his brother William physically attacked him, according to the Guardian, which says it has seen a copy of the Duke of Sussex’s memoir, Spare.

The newspaper reported that the book sets out an argument between the pair over Prince Harry’s wife Meghan.

“He grabbed me by the collar, ripping my necklace, and he knocked me to the floor,” the Guardian quotes Harry.

Kensington Palace said it “has no comment to make”.

BBC News has not yet seen a copy of Spare. Buckingham Palace, which represents the household of the King, has said it would not be commenting.

Meanwhile, in a new clip previewing an interview with ITV, Prince Harry refuses to commit to attending the King’s coronation in May.

He says there is a lot “that can happen between now and then” and the “ball is in [the Royal Family’s] court”.

Prince Harry’s memoir will not be published until next Tuesday, but the Guardian said it obtained a copy amid what it called “stringent pre-launch security”.

According to the Guardian, the book says the row was sparked by comments Prince William made to Prince Harry at his London home in 2019.

Prince Harry, the paper says, writes that his brother was critical of his marriage to Meghan Markle – and that Prince William described her as “difficult”, “rude” and “abrasive”.

The Duke of Sussex reportedly writes that his brother was “parrot[ing] the press narrative” as the confrontation escalated.

Prince Harry is said to describe what happened next, including an alleged physical altercation.

“He set down [a glass of] water, called me another name, then came at me. It all happened so fast. So very fast.

“He grabbed me by the collar, ripping my necklace, and he knocked me to the floor.

“I landed on the dog’s bowl, which cracked under my back, the pieces cutting into me. I lay there for a moment, dazed, then got to my feet and told him to get out.”

Martin Pengelly, a journalist for the Guardian’s US website who wrote its story, said he had not approached Prince William’s communication team.

The reporter said that his article is “a report on Harry’s book, which he’s written, it’s Harry’s account”.

Mr Pengelly told BBC Radio 5 Live: “We carefully, obviously in reporting it, didn’t call it a fight because Harry says he didn’t fight back.”

Prince Harry writes that his brother urged him to hit back and he refused to do so, according to the Guardian, but Prince William later looked “regretful, and apologised”.

Photographs suggest Prince Harry regularly wore a dark necklace at events such as the Invictus Games, and on foreign tours with Meghan, as recently as September 2019.

While publishers at Penguin Random House are yet to confirm whether the leaked excerpts from the book are genuine, Prince Harry has recently spoken of his troubled relationship with his brother.

In the couple’s Harry and Meghan Netflix documentary, Prince Harry describes a meeting he attended with his brother, and father, the now King.

Prince Harry described the conference in early 2020, which was also attended by the late Queen, as “terrifying”.

“It was terrifying to have my brother scream and shout at me and my father say things that just simply weren’t true, and my grandmother quietly sit there and sort of take it all in,” he said.

The Guardian says Prince Harry details a meeting with Charles, then Prince of Wales, and Prince William after the funeral of his grandfather, Prince Phillip, in April 2021.

According to the paper, Prince Harry writes his father stood between him and Prince William, and said “please, boys, don’t make my final years a misery”.

In a trailer for a sit-down interview, which will be broadcast on 8 January ahead of the book release, the prince said: “I would like to get my father back, I would like to have my brother back”.

However, Prince Harry told ITV’s Tom Bradby “they’ve shown absolutely no willingness to reconcile,” although it was not clear who he was referring to.

Spare, ghostwritten by memoirist JR Moehringer and part of a multi-million dollar book deal, was previously believed to be subject to the utmost secrecy with few details known about its content.

“For Harry, this is his story at last,” Penguin Random House said in a publicity statement back in October.

“With its raw, unflinching honesty, Spare is a landmark publication full of insight, revelation, self-examination, and hard-won wisdom about the eternal power of love over grief.”