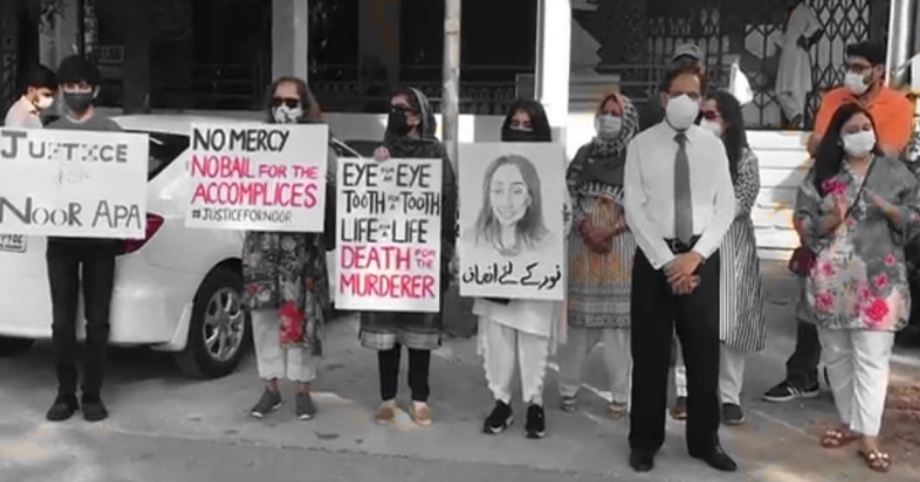 ISLAMABAD, SEPT 13: A protest was held against the killing of Noor Mukadam — daughter of former Pakistani diplomat Shaukat Mukadam — outside the Islamabad High Court on Monday with demonstrators demanding justice.

The protest demonstration was staged by friends of Noor, who converged outside the IHC as the court took up the post-arrest bail petitions of the parents of Zahir Jaffer — the prime suspect in Noor Mukadam’s killing.

The protesters, holding placards seeking justice for Noor, urged the court to not grant bail to Zahir’s parents as they had allegedly supported him.

Meanwhile, Justice Amer Farooq of the IHC conducted a hearing on the post-arrest bail pleas of the key suspect’s parents — Zakir Jaffer and Asmat Zakir Jaffer — and issued notices to authorities concerned before adjourning the hearing till Sep 15.

Earlier during the proceedings, Justice Farooq directed the counsel of Noor’s family, Advocate Shah Khawar, to submit a power of attorney today. The counsel assured the court he would submit the document.

Khawar told the court that the bail cancellation pleas for Therapyworks — a counselling and psychotherapy service — employees were also pending, saying the court could also take up the petition.

Justice Farooq remarked that the rules for bail cancellation and approval were different, hence “we will take up those petitions separately.”

The employees of Therapyworks were arrested on Aug 14 by investigators over their alleged involvement in trying to rescue the prime suspect by taking him from the house before the police arrived. They were granted bail on Aug 23, which was challenged by Noor’s father on Aug 26.

Zahir’s parents were taken into custody on July 25 following the arrest of their son for allegedly concealing the material facts from the investigation team. Subsequently, they had approached a district and sessions court for bail.

The court had on Aug 5 dismissed the post-arrest bail applications of Zahir Jaffer’s parents and observed that they abetted the murder of Noor and attempted to conceal material evidence.

The investigators, in a challan submitted to the sessions court on Sep 9, said Noor tried to escape twice from the illegal detention of Zahir. However, due to the collusion of the security guard and a gardener, she could not manage to get herself free.