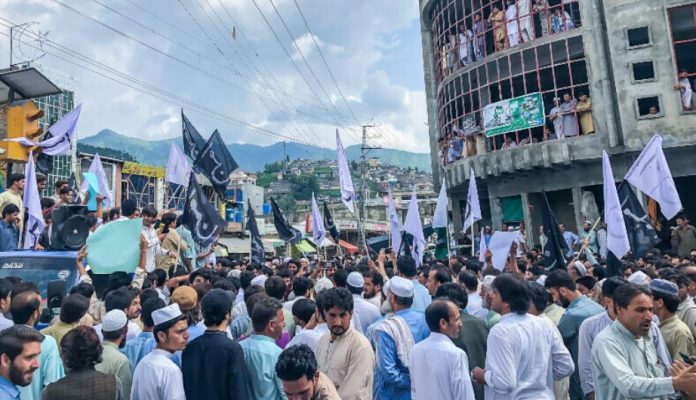 Swat: A large group of people on Friday took to the streets across Swat to protest against the presence of militants in mountains bordering the area, asserting that they will never allow any elements to sabotage the “hard-earned peace” in the region.

The protests, titled ‘We want peace in Swat’ and ‘No to terrorism’, were held near the Matta Chowk in Khwazakhela tehsil and Kabal Chowk in Kabal tehsil.

The demonstrators were seen holding white and black flags as they walked through the markets of the districts. They also chanted “We want peace in Swat and Khyber Pakhtunkhwa” slogans.

“We are peaceful people and we want durable peace at any cost. These elements must know that we have earned peace after extending unlimited sacrifices and we will not allow anyone to sabotage it,” said Ali, while addressing the rally.

He continued that the residents of the region had earned peace over the years and were not ready to be “disgraced, displaced, or killed”.

The participants of the rally expressed anger and sadness over videos recently released by militants. Last week, a video surfaced on social media showing a man claiming to be a member of the TTP interrogating an army major whose hands had evidently been tied behind his back, and asserting that the militants had taken him and two others — a deputy superintendent of police (DSP) and a soldier — hostage. A jirga later successfully negotiated the release of the captives.

On August 8, it was reported that four policemen, including a DSP, were injured in a clash between police and suspected militants at the mountainous border of Swat and Dir districts. While Swat’s district police officer said only one policeman was injured and the militants suffered heavy casualties, unofficial sources said four policemen were hurt.

Also last week, PTI MPA Malik Liaquat Khan was seriously injured and three others were killed in Lower Dir when the vehicle in which he was travelling came under attack by militants.

At today’s protest, Namdar said that the residents wanted the district administration and the provincial government to investigate the incident through a judicial commission immediately and put its findings in front of the entire nation.

“Ensuring peace in Swat is the duty of security agencies and if they fail to do so, it will be a violation of the Constitution,” he added.

Furthermore, the protesters questioned the role of the security and law enforcement agencies regarding the reappearance of militants in the mountains of Swat.

“We are shocked to see the videos of Taliban and we want to know how did the militants enter Swat despite the presence of a huge number of security agencies,” another man, Yousafzai, demanded.

He demanded that the government immediately eliminate militants from Swat if “any such elements existed in a real sense”.

Today’s protest was among several others continuing in North Waziristan and neighbouring areas for more than 25 days against lawlessness and targeted killings in different areas.

In the wake of these demonstrations, the government, on Thursday, constituted a 16-member committee to hold talks with relevant stakeholders with a view to controlling the deteriorating law and order situation.