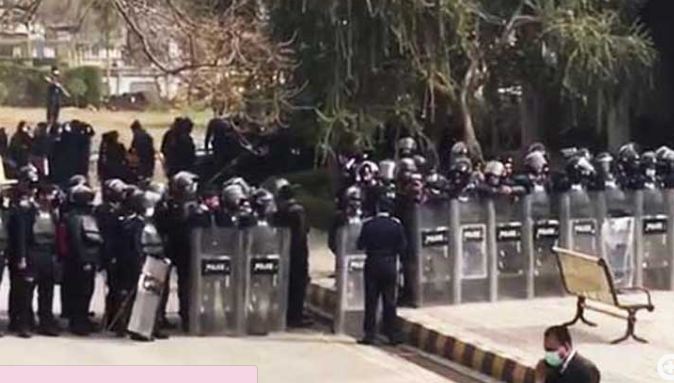 According to sources, Fawad Chaudhry will be shortly produced before the court in F-8 and a huge contingent of police has been deputed at the katchery.

The police high command through wireless call has directed the personnel to reach F-8 to avoid any untoward incident.

The PTI leader was taken into custody from his residence in Lahore by police in the wee hours of Wednesday. His sudden arrest angered leaders of the PTI, including Hammad Azhar and Farrukh Habib, as they warned of launching countrywide protests if the location of Mr Chaudhry was not disclosed as they claimed that details about his arrest were not being shared.

It was revealed that the former information minister was arrested in a case registered by Election Commission of Pakistan (ECP) Secretary Umer Hameed at the Kohsar police station of the capital city.

Meanwhile, the PTI leaders have expressed concerns over the arrest of Fawad Chaudhry and announced to move the court against it.

Earlier, thousands of PTI workers gathered outside PTI chief Imran Khan residence in Zaman Park, Lahore in the wee hours of Wednesday to protect their leader from possible arrest by the Punjab police

The PTI leader, according to the First Information Report (FIR), has been booked under sections 153A, 506 and 124 A of the PPC for allegedly threatening the ECP and its members in a televised interview on Tuesday. The FIR carries the excerpt of the former MNA’s statement wherein he alleged that the election commission had become a “Munshi” as the election commissioner signed things like a clerk after they were sent to him by the government.

Mr Chaudhry said those who would be involved in injustice to the PTI would be pursued until they were punished. He said people should pursue the elements who were deceiving public, to their houses. Expressing reservations about the appointments of some officials in the ECP Punjab ahead of elections, he said if these appointments were not rolled back, “we warn that the election commission and its members will have to pay back”.

The complainant said Fawad Chaudhry had threatened the chief election commissioner, members of the ECP and their families in his speech which he described as an attempt to create hurdles in the electoral process.

“The speech has created a permanent threat for the ECP members and their families,” he said, adding that the PTI leader had attempted to create differences between the government and the ECP. “It is a serious crime to influence the electoral process by issuing threats to the constitutional institutions,” he said, adding that such statements could lead to chaos in the country.

Earlier in the day, a court in Lahore allowed police to take PTI leader Fawad Chaudhry to Islamabad hours after he was arrested from his residence over provocative statement against the top electoral body.

The PTI stalwart was taken into custody in the wee hours of Wednesday after he was booked under sections 153A, 506 and 124 A of the Pakistan Penal Code on a complaint lodged by Election Commission of Pakistan Secretary Umer Hameed. Police produced Mr Chaudhry in court of Rana Muddasir in handcuffs at 10am and sought one-day transit remand as they wanted to shift him to Islamabad as the case was registered at the Kohsar police station.

Speaking to the media, the PTI leader said security had been placed in a way as a “terrorist” was being brought to court, adding that he was unaware of the charges levelled against him. He also urged people to take to the street against the government. He said former South Africa president Nelson Mandela had also been booked in a sedition case.

During the hearing, the former information minister requested judge Rana Mudassir to provide him a copy of the FIR registered against him, which was accepted. His lawyer opposed the transit remand, saying the distance between Lahore and Islamabad was just four hours and there was no need of remand. Police should directly take his client to the federal capital and produce in court, he said.

The PTI leader also said he had filed a petition in the Lahore High Court (LHC) against his illegal detention. He requested the judge to not issue verdict on the transit remand plea until the LHC decides the case.

The sudden arrest of Mr Chaudhry has angered the PTI leaders including Hammad Azhar and Farrukh Habib who warned of launching countrywide protests and moving court against it.

Later, the Lahore High Court (LHC) summoned the Punjab and Islamabad IGPs over police failure to produce senior PTI leader Fawad Chaudhry in court on a plea challenging his overnight arrest by the Islamabad police.

A petition was filed in the high court, challenging Fawad Chaudhry’s arrest for “threatening” the Election Commission of Pakistan’s (ECP) members and their families. The petition was subsequently taken up by LHC’s Justice Tariq Saleem Sheikh. During the hearing, the court instructed police to present Fawad in court by 1:30pm.

The judge had earlier asked police to present Mr Chaudhry in court at half past one but police refused to comply without a written order. As the court took up the case, Justice Sheikh asked the law officer about the whereabouts of the PTI leader. As the additional advocate general told the court that police had already taken the petitioner to Islamabad, the judge expressed his annoyance and remarked that “the court knows how to have its orders implemented”.

The judge gave police time till 6pm to produce Fawad Chaudhry failing which, he said, he would take an action.

She said her husband was kidnapped, not arrested as the police team had no warrant when they conducted the raid.

Hiba said eight to 10 police officials jumped into the premises of their house, opened the gates and took her husband without showing the arrest warrants or any other legal document. The family, she said, had no idea where Fawad had been taken.

She said, “whosoever is behind Fawad’s arrest – whether it’s the ‘imported government’ or anyone else – they should answer on under what law he has been arrested.”

“We were not informed. Four police vehicles came and they took Fawad along with his mobile phone. We don’t know where he has been taken,” she said.

Hiba Fawad said they had contacted the police stations concerned in Punjab but there had been no update about her husband. She appealed to the CJP and Prime Minister Shehbaz Sharif to make sure the family was informed about Fawad’s condition and where he had been taken or else an FIR for kidnapping would be lodged.

In a tweet, the former prime minister said: “Fawad s arrest on his apt description of the CEC [chief election commissioner] leaves no doubt in anyone s mind that Pak[istan] has become a banana republic devoid of rule of law”.