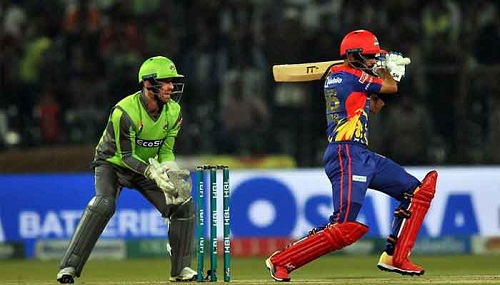 KARACHI: The most anticipated game of the Pakistan Super League (PSL) between arch-rivals Lahore Qalandars and Karachi Kings will be played at the National Stadium Karachi today.

It won’t be wrong to call this match the El Clasico of the PSL.

Both sides have similar positions coming into this match with having won two out of their first three encounters. Kings – the defending champions – are, however, have a slight edge over Qalandars due to better NRR.

They’ll also have the advantage of the outcome of their previous match, the final of PSL V in which they had defeated Qalandars. The overall record of 7 wins from 11 games is also in Karachi’s favour. Qalandars have won only 4 matches.

Kings must be with high confidence after their remarkable win over Multan Sultans when they chased 198 convincingly a day before the game against Lahore.

Qalandars, on the other hand, 24 hours before seeing Karachi crushing Sultans, went down against the same opposition as their batting couldn’t post enough runs on the board.

But the past track record seems irrelevant in this contest now as Qalandars have started tremendously in the tournament and have shown better results since last year, contrasting to their performance of the first four editions.

The current form of Mohammad Hafeez will be a major source of motivation for Lahore Qalandars. The opening batsman has amassed 166 runs in 3 innings. 10 runs behind his rival in Karachi’s camp – Babar Azam.

Both the batsmen are likely to be the key players for their respective sides.Qalandars will also be hoping for some runs from Fakhar Zaman, who starred for the side against Quetta Gladiators and its captain Sohail Akhtar who is known for his aggressive batting.

Sohail Akhtar will also hope for some fireworks from Ben Dunk who has yet to show his class in the PSL. The team would surely want him to repeat what he did with Karachi in Lahore last season.

Qalandars bowling, after the departure of Rashid Khan, is very much dependent on local talent but having Shaheen Shah Afridi and Haris Rauf there, it still looks formidable. They’ve also included Nepal’s Sandeep Lamichhane as a replacement to Rashid but his availability for tonight’s game is unclear.

On the other hand, Kings batting will surely pose a serious challenge to Qalandars. They have posted two scores of 190+, though failed to defend one of them but that doesn’t take any credit away from their batsmen.

Babar Azam, Sharjeel Khan, Joe Clarke, Mohammad Nabi – they all look in great form and can be a daunting task for any bowling line.