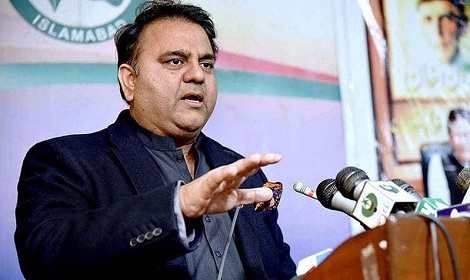 ISLAMABAD, SEP 26 /DNA/ – Pakistan Tehreek-e-Insaf (PTI) Senior Vice President Fawad Chaudhary demanded impartial and thorough investigation into the audio leaks from the PM House containing conversations between the PM and the cabinet members, which, he said, a major security lapse and another tragic incident for the people of the country.

Addressing a press conference here on Monday, he said that it was a very serious issue and it must be investigated properly; however, surprisingly, neither the PM House issued a statement nor announced investigation on the matter hitherto.

He lashed out the imported government for being unable to manage its affairs efficiently and demanded that action should be taken against Shehbaz Sharif for providing undue facilitation to procure machinery from India for Maryam Nawaz’s son-in-law on her request.

Fawad quoted a TV channel that the imported government was so scared that they were in talks with the hackers to purchase the data that was put on the dark web, demanding $345,000, who claimed to have more explosive audios, which are yet to be released. However, he that what was the guarantee that the hacker would not blackmail the government again.

Fawad stated that hackers even claimed that they had even conversations of Pakistan security agencies pertaining to the security related issues.

He said that the breach suggested weak cybersecurity in the PM’s Office and that anything could be leaked as no conversation is safe there, adding that the 140-hour-long audio leak of the PM’s House has been available on internet since August 20, but no institution was aware of it.

Fawad stated that the IB was the relevant agency that has to monitor the affairs of the PM House, but despite spending billions of rupees, the agency remained completely unaware in this regard.

He said that a Twitter account was then created through which a few minutes of the conversation was leaked to the general public but unfortunately, even after several hours, the imported government failed to react to the unfortunate development. “PTI spent a lot of money to provide the latest equipment to agencies,” he added.

Fawad termed Rana Sanaullah and Marriyum Aurangzeb’s statements on the matter as funny, who, he said, indirectly confirmed the conversation.

He said that the National Assembly speaker must summon the PM and other members of the national assembly before the privilege committee to answer about it because it showed that Pakistan has faced a serious national security crisis.

Unfortunately, Fawad maintained that phone tapping had become unfortunately common in the country.

Fawad demanded that the imported government should bring the people involved in the matter to the fore and latest debugging system should be installed in the PM House.

He said that the interior minister confessed that the PM house was not secure and everything was recorded there, which showed as who this government was functioning.

Talking about the government’s decision to replace Miftah Ismail with Ishaq Dar, he said that after the audio leak’s conversation between Maryam Nawaz and Shehbaz Sharif, Miftah should part ways with the government instantly.

“We repeatedly raised the issue that at the request of Maryam Aurangzeb, the cigarette industry is being facilitated because her husband is the marketing in-charge of the world’s largest tobacco company,” he added.

He said that the children of important ministers were adjusted in PTC and other companies, adding that the imported government strongly recommended to resume trade from India, but only PTI opposed it.

Fawad Chaudhry said that the Prime Minister of Pakistan was saying that the machineries should be brought from India through another country, adding that a person who could bypass his own country system how he could be called Sadiq and Amin?

He questioned: Can the Sharif family be given the task of making the country’s policies, as Shahbaz Sharif was breaching the country’s laws for his family and using the media for vested interests. He stated that Maryam Nawaz expressed annoyance over price hike in her tweet but she was advocating increase in fuel price in front of her uncle. He said that the leaked audio revealed the contradictory stance of Sharif family regarding the issue of Musharraf, adding that even chameleons don’t change color like the Sharif family does.

He said that in another audio leak of 4-5 ministers, some ministers were discussing the mechanism of accepting PTI members’ resignations, adding that these decisions were being made from London and Nawaz Sharif was making them.

Fawad stated that Chief Justice Islamabad High Court said that they did not interfere in the decisions taken by the Speaker. He said that Rana Sanaullah revealed that the resignations would be accepted on the 5th and they were done on the same date.

He hoped that the Chief Justice of Pakistan would take notice of the matter, adding that we are submitting all these audios records before the Supreme Court so as the apex court could decide the matter.

He said that a new reference should be filed in NAB against the PM and action should be taken against those ministers who interfered in the functioning of the parliament.

On the occasion, he expressed heartfelt condolence over the martyrdom of Pakistan Army soldiers in the unfortunate helicopter crash in Harnai.

He said that PTI expressed grief and sorrow over the martyrdom of Pakistan Army with the bereaved families and Pakistan Army and may Allah give patience to their families. He said that the technical accidents of helicopters witnessed an alarming upsurge which was concerning.