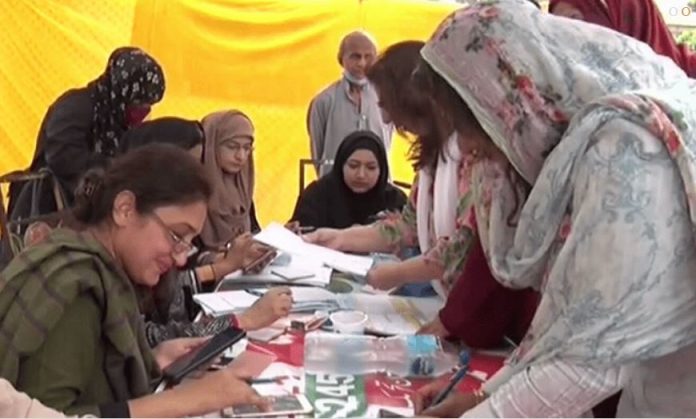 KARACHI: The PTI is leading as per unofficial results as the counting of votes is underway after polling concluded for the by-election in Karachi’s NA-245 constituency on Sunday.

According to unofficial results so far, PTI’s Mahmood Baqi Moulvi is in the lead with 10,471 votes, Muttahida Qaumi Movement-Pakistan’s (MQM-P) Moeed Anwar trails with 3,857 votes while Tehreek-i-Labbaik Pakistan’s (TLP) Muhammad Ahmed Raza is in 3rd with 3,058 votes.

Citizens cast their vote to pick their representative for the seat that was vacated by PTI’s late Aamir Liaquat Hussain.

The process, which began at 8am this morning and continued till 5pm, saw low turnout initially, according to DawnNewsTV. Footage broadcast on television showed election officials sitting in a relatively barren polling station.

However, as the day progressed, some citizens could be seen at election camp offices getting information.

Rajput said the polling process was underway in a transparent manner and the government had ensured all arrangements, adding that “sensitive” polling stations were under surveillance.

The by-election on the seat, which fell vacant after Aamir Liaquat’s sudden death in June, was originally scheduled to be held on July 27, but the Election Commission of Pakistan (ECP) had to postpone it amid torrential rains.

Liaquat was elected on a PTI ticket in the 2018 general elections, defeating Farooq Sattar of the MQM-P by securing 56,673 votes against his 35,429 votes.

As polling was underway, PTI’s Fawad Chaudhry urged the people of the metropolitan city to vote in the party’s favour. “Today, Karachi will stand with the truth, with democracy and true freedom,” he said.