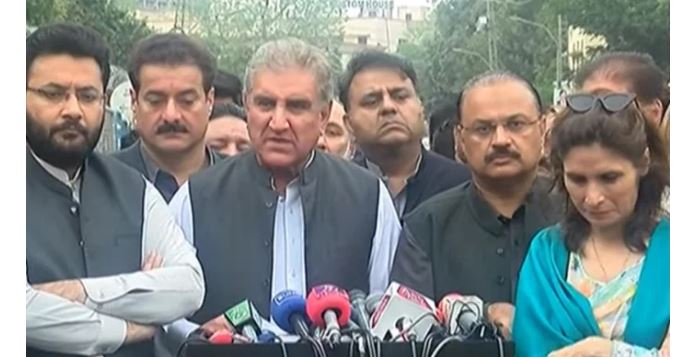 ISLAMABAD, NOV 14: The Punjab Police had registered a first information report (FIR) on the Supreme Court’s orders last week, but the PTI was not satisfied as it did not contain the names of the people whom Khan wanted to nominate.

Bullet fragments hit Khan in the legs on November 3 during PTI’s long march in Wazirabad, following which he was moved to Shaukat Khanum Memorial Hospital in Lahore. He was discharged later and is now at his residence.

Before the PTI, Prime Minister Shehbaz Sharif had also written letters to Chief Justice Umar Ata Bandial to form judicial commissions on two issues — the attack on Khan and the murder of Sharif.

PTI’s petition claimed that the assassination bid near Gujranwala was a “clear attempt to literally eliminate ex-Prime Minister Imran Khan”.

The petition maintained that following the incident, another “grave injustice” continues to fester as the police have “refused to register the FIR according to the request submitted by the complainant”.

In light of this, the PTI urged the top court to invoke its original jurisdiction under Article 184(3) of the Constitution.

The petition also sought the formation of a judicial commission into the alleged “illegal video recording” of Senator Azam Swati and his wife, which according to the party, contains their footage while they were staying at an official rest house.

“This is an infringement of inviolable dignity of man guaranteed under Article 14 of the Constitution of Pakistan as well as a gross violation of the law in terms of wiretaps and clandestine camera placements for the purposes of making covert videos,” the petition said.

Moving on, the party has also raised the matter of slain journalist Sharif’s murder with the court. The senior anchorperson was killed in Kenya and Kenyan authorities claim that he lost his life in a “mistaken identity case”.

The party said the “brutal assassination of famous journalist has created lot of consternation in the public in-general and journalist community in particular”.

The petition said that it is crucial that an independent commission inquires about the circumstance that compelled Sharif to flee the country and eventually end up in Kenya.

“In view of the foregoing, it is respectfully requested that the instant application may kindly be put before the honourable Supreme Court for an appropriate and timely order for the constitution of a Commission in terms of Order XXXII of Supreme Court Rules 1980 to hold public inquiry in the above-said issues and record its findings in a detailed report.”

‘Right’ not being recognised

In a press conference after submitting the petition to the SC’s Lahore Registry, PTI Vice President Shah Mahmood Qureshi said that the party has requested the chief justice to form judicial commissions.

Qureshi said that the MPs have submitted applications in Karachi, Peshawar, Quetta, Islamabad and Lahore.

He said that the facts and those responsible for the attack should be brought forward while urging an investigation into the matter. “Our right to launch an FIR is not being recognised,” he added.

For his part, PTI Senior Vice President Chaudhry Fawad Hussain said Khan barely survived an assassination attempt, but an FIR of the attack was not being registered.

“The law is clear. I am nominating that these people are involved in it. You simply register the complaint,” Fawad said.

“I say don’t weaken the Supreme Court so much that people stop looking to it,” Fawad said, adding that decisions could not be taken in closed rooms in Pakistan.

“If elections were held timely, the country would be in a better condition.”

He said PTI was fighting a war to redeem the pride of institutions. “A crisis has arisen in the judicial system, the same is the case with other institutions,” Fawad added.

“Our fight is to restore the gravitas of the constitution, democracy, and institutions. We have advised them to avoid conflicts and move forward,” Fawad said, adding: “There are three issues on which we want the supreme court to take notice”.

Alluding to the ouster of his party in a late-night vote of no-trust, he said the “regime change operation” created a lot of instability in Pakistan.