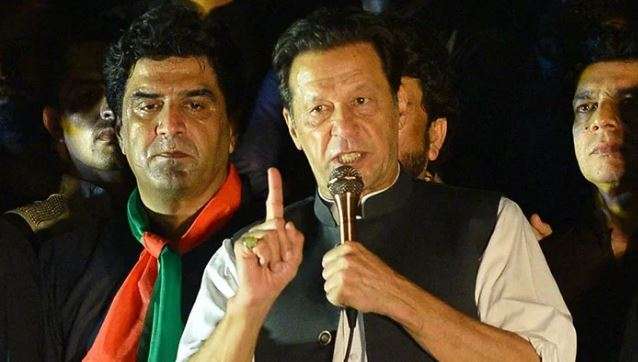 ISLAMABAD: PTI Chairman Imran Khan on Monday said that his party intends to approach courts over the matter of audio leaks and will seek the formation of a joint investigation team (JIT) to probe which intelligence agency is involved in the “bugging” of the PM House and Office.

Two audio leaks allegedly involving the PTI chief went viral on Friday. Khan, in one of them, was heard allegedly discussing horse trading with an aide.

The comments made by the former premier in the purported audio suggested that it was recorded before the voting on the no-confidence motion was held against him.

“Audio leaks are a serious breach of national security as they call into question the entire security of the Prime Minister’s Office and PM House,” the former prime minister wrote on Twitter, claiming that the secure line at his residence was also bugged when he was the premier.

“We intend to go to court to establish authenticity of leaks and then form a JIT to investigate which intel agency is responsible for the bugging and who is leaking out the audios many of which are edited/doctored,” he said.

The PTI leader said that it is a critical matter as “sensitive security issues are and have been illegally recorded and subsequently hacked”, which implies that the confidentiality of the country’s national security has been “exposed” globally.

The PTI chief’s allegation of intelligence agencies being involved in bugging comes after the interior minister had categorically stated that no agency was found involved in the security breach.

Moreover, the federal cabinet has already formed a committee to investigate the breach of security.

The meeting was attended by federal ministers, cabinet secretary, and representatives of the Inter-Services Intelligence and Intelligence Bureau.

The federal government established the committee to investigate the security breach at the PM House and suggest steps to ensure safety.

It is important to note that neither the PML-N nor the PTI contradicted the contents of the audios, however, Prime Minister Shehbaz Sharif categorically denied that his government has any role in the matter.