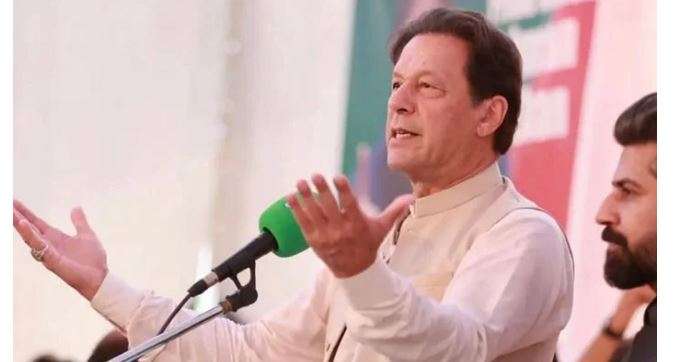 Swati’s custodial torture for a tweet on NRO-2 another shameful act: Imran Khan

ISLAMABAD: Pakistan Tehreek-e-Insaf (PTI) Chairman Imran Khan and party leadership termed the illegal detention and the subsequent custodial torture of PTI Senator Azam Swati for a tweet on NRO-2 a shameful and condemnable act and stated ‘enough is enough’, demanding his immediate release from unlawful custody.

PTI leadership in their strong reactions on Thursday said that biggest criminals were only allowed to evade accountability after stealing billions from the national kitty but brought to power while respectable parliamentarians and PTI leaders were being arrested and tortured for raising voice to make Pakistan in independent country in true sense.

Chairman PTI in his strong reaction on Thursday said: “Azam Swati’s custodial torture for a tweet on NRO-2 is yet another shameful act in our history.”

He raised question: “Can torture and intimidation make people respect any individual or institution?”

Imran Khan stated that the Holy Quran teaches us respect and humiliation are solely in Allah’s jurisdiction, which He dispenses according to our deeds, adding that those who have allowed the biggest criminals not only to evade accountability after stealing billions from the nation but to come to power again are destined to be humiliated.

PTI senators staged a protest demonstration outside Parliament House and strongly condemned the arrest of Swati and his custodial torture. Speaking on the occasion, Opposition Leader in the Upper House, Dr. Shahzad Waseem said that senior politician Azam Swati’s house was raided and sanctity of four walls was violated.

He said that the violence against him was a proof of fascism of the imported government, demanding his immediate release.

Shahzad said that children and women were harassed and his house was vandalized and even no one was knew about his whereabouts until he himself told his ordeal before the court.

Lashing out at the imported government, he said that the custodial torture was at its peak in this government of crooks, as they neither spared Shahbaz Gill nor Senator Saifullah Khan Nyazee, adding that now they subjected to brutal torturer and harassment Azam Swati.

He stated that they did not have any regard for the sanctity of the Parliament and parliamentarians what to talk of ordinary people, as there was no law and constitution but only a rule of might is right.

Dr. Shahzad went on to say that the big thieves were imposed on the nation to rule the country while jails were full of people arrested in trivial crimes.

Speaking on the occasion, PTI Senator Shibli Faraz strongly condemned the arrest and torture of Swati and said that the cable of crooks imposed on the country were responsible for all these crimes.

However, he vowed that such tactics would not dampen the courage of PTI leaders and the countrymen who were all-set to rid the country of these thieves, who used the parliament house to give themselves clean-chit in billions of corruption cases.

He said: “Enough is enough and now people of Pakistani will take their decisions.”

Ejaz Chaudhary said that Inshaullah Imran Khan would soon become the prime minister of the country and would rid the country of these corrupt rulers and would make Pakistan in independent country truly.

In his strong reaction, PTI Central Senior Vice President Fawad Chaudhary said that reports of torture on Azam Swati were disturbing, adding that torturing political prisoners has become a new normal in Pakistan.

PTI Central Senior President Dr. Shireen Mazari said: “The fascist government once again showed its intolerance for any democratic criticism and sent FIA to arrest Swati at 3.00 am early this morning from his Islamabad residence, which is shameful and condemnable. Dark shadows hang over his arrest.”

She said: “The brave man Senator Azam Swati told as why he was arrested but also how he was subjected to torture while in custody, which was shameful and utterly condemnable.”

“As just for tweets! Seriously this is now the end of even a facade of democracy the way the imported government and its string pullers are behaving,” she added.

PTI Sindh President Ali Haider Zaidi reacted: “Pathetic state of affairs, as senators being arrested for making statements, while money launderers getting off the hook and sitting in positions of power in the PM house.

He strongly condemned the arrest of Azam Swati and added it’s becoming a banana republic.

KP Finance Minister Taimur Khan Jhagra said: “Our citizens see a political mess; an economic mess; and the ridiculing of accountability. Time to bear the political criticism that comes in today’s polarised Pakistan.”

He demanded that the answer was elections; not fear through arrests. It is not working. Don’t dig deeper.

PTI Leader Hammad Azhar said that Senator Azam Swati tortured and arrested whilst those who looted the country being given clean chits. Fascism being normalized, as Maryam Nawaz left for London, Ishaq Dar became Finance Minister, while the cases of Shehbaz and Hamza are also over.

However, he added that Hamid Zaman, Saifullah and Azim Swati are in jail, adding that the matter has gone too far.

PTI Senator Shaukat Tarin reacted that arresting Senator Azam Swati in the middle of the night without any cogent reasons indicates no tolerance for decent in Democratic country. We are fast moving towards jungle rule might is right.

PTI leader Sayed Zulfi Bukhari reacted: “Mariam is let off for her theft. Shabaz and Hamza are not criminals any longer. And a Senator can’t even voice his option on a tweet. Despicable behaviour by FIA for entering Swati home at 3am and arresting him. He too has been tortured.