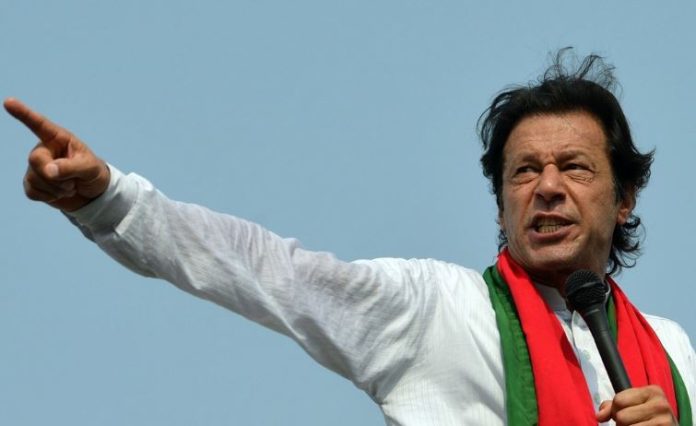 Minus one, technical knockout of Imran Khan:

ISLAMABAD, SEP 9, /DNA/ – Pakistan Tehreek-e-Insaf (PTI) announced second phase of real independent movement under which the party would hold protest rallies across the country from today (Saturday) against the attempts to technically knockout PTI Chairman Imran Khan and against the imported government’s nefarious plan of ”minus one formula”.

Central Vice President Fawad Chaudhry made the announcement during a press talks following a PTI political committee meeting held with Imran Khan in the chair here on Friday.

He announced that the PTI would launch second phase of their protest movement from today (Saturday) to express solidarity with Chairman PTI Imran Khan, urging the people to come out against the government’s bid of “minus one formula”.

Fawad Chaudhry said that efforts were being made to knock Imran Khan out politically, as FIRs were being registered against him at a time when there were floods in the country, adding that the incumbent government did not have a public mandate.

During the meeting, the party leadership expressed their full confidence in the leadership of Imran Khan.

He expressed hope that the entire nation would participate in the rallies unitedly against the campaign of technical knockout against Imran Khan and against the postponement of the by-elections, adding that the imported government wanted to push Imran Khan out of the political arena.

Fawad expressed his surprise that the ECP deferred the by-elections when there were no floods.

However, he stated that the imported government was a dummy and real decisions were being made somewhere else, adding that PTI was only one political party that was in the opposition.

Fawad Chaudhary made it clear that keeping in view the political and economic situation, the cabal of crooks could not be given much time to rule anymore, as elections were inevitable, adding that the real freedom movement was in its final phase and soon the people’s elected government would take the power.

Fawad Chaudhry revealed that the PTI would take about back-breaking inflation, unscheduled prolonged power outages and other unabated miseries inflicted by this government of crooks; however he added that at present they were focus on defeating the minus one agenda against Imran Khan.

He said that the ECP’s decision to delay the by-polls further strengthened the perception and the people would jointly protest across the country to foil the nefarious plan.

He stated that at the time when Pakistan was confronting with myriad issues amid the devastating floods that wrought havoc across the country, the imported government were filing terrorism cases against PTI Chairman and attempts were being made to disqualify him.

Fawad Chaudhary noted that the incumbent government was unlawful and illegal and it sole way to maintain was to out Imran Khan of politics and then hold elections, which he said that was impossible and unacceptable.

Fawad Chaudhry said that Pakistan’s politics was currently running on Imran Khan and anti-Imran Khan and if he was being disqualified democracy cannot be maintained in the country and Pakistan would become a “Banana Republic” and people would never accept it come what may.

He said that all the parties except PTI were in the government, and pushing the only opposition party against the wall was alarming adding that Imran Khan would announce his next phase of real independent movement in PTI’s Gujranwala public gathering.

Fawad Chaudhry stated that they realized that the imported government could not be given much time as they already destroyed the country politically and economically.

Fawad Chaudhry said that they explained the issues to a sufficient extent in the reply submitted to the Islamabad High Court and now it was up to the lawyers to satisfy the judges, adding that the lawyers would chalk out their plan of action in this regard.

He strongly condemned the mistreatment of journalists by the Prime Minister’s security staff and said that CM KP and other cabinet members of Punjab and KPK were present on the road, but the registrar denied them enter, which was also condemnable.