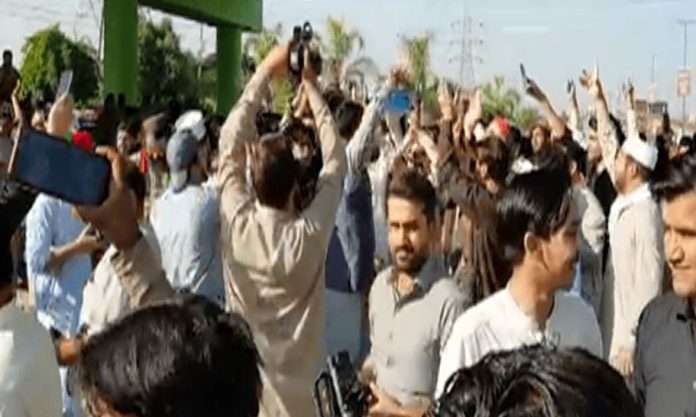 ISLAMABAD, OCT 21: PTI workers across the country took to the streets on Friday in protest after the Election Commission of Pakistan (ECP) disqualified party chief Imran Khan in the Toshakhana reference in a massive win for the ruling coalition.

The PTI has said that it will challenge the electoral watchdog’s decision in the Islamabad High Court. At the same time, party leader Fawad Chaudhry asked the public to take to streets “for their rights”.

In Islamabad, a large number of PTI workers and supporters converged on Faizabad Interchange where police resorted to tear gas shelling to prevent the protesters from marching towards Islamabad.

Meanwhile, Islamabad police said that citizens had the right to protest peacefully but blocking roads and damaging state property was against the law.

“The governments of other provinces are requested to stop the movement of illegal protests headed for the federal capital,” Islamabad police said, adding that tear gas was being used in Faizabad in light of the situation.

Islamabad police also appealed to elders, women, and children to avoid unnecessary travel. “Citizens are requested to keep routes leading to hospitals open,” the capital police said in a tweet.

In Karachi, the PTI workers gathered outside the party’s office located on Sharea Faisal. A police contingent also reached the scene in order to pre-empt any untoward situation.

Traffic on the thoroughfare was disrupted as the number of protesters began to grow. Police also deployed water canons in light of the looming threat of violence.

Visuals shared by the party’s official Twitter account showed Ali Haider Zaidi and other leaders taking part in what it dubbed a “peaceful protest”.

Meanwhile, Karachi Administrator Murtaza Wahab said the PTI’s protest against the ECP verdict was “beyond comprehension”. In a statement, he said the PTI must accept the electoral watchdog’s decision.