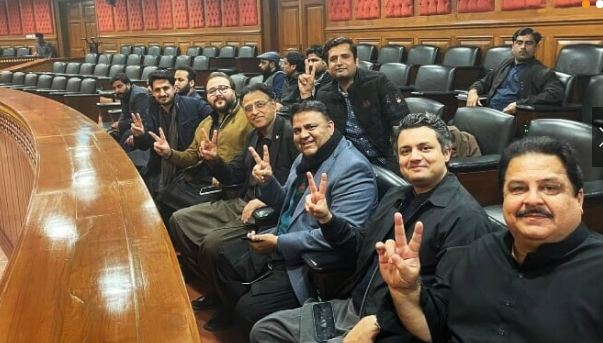 A session of the Punjab Assembly’s session is underway, with lawmakers from both treasury and opposition benches resorting to chanting slogans and ruckus — for the third consecutive day.

In conversation with a private television channel, Fawad said that a total of 185 lawmakers of the PTI and Pakistan Muslim League-Quaid (PML-Q) were present in the session, while two members were on their way to the assembly.

The former federal information minister said the two lawmakers were on their way to the session from Chakwal and Bahawalpur, respectively, and once “they are in the assembly, Elahi will take the vote of confidence”.

The development comes after the Lahore High Court (LHC) ruled that the “governor is empowered to ask the chief minister to take a vote of confidence during an ongoing session” — a notion that the PTI had strongly rejected time and again.

The LHC’s order came when it held a hearing on CM Elahi’s plea against his de-notification by Punjab Governor Baligh-Ur-Rehman. The governor removed the chief minister from the post last month through a notification after he failed to take a vote of confidence within the stipulated time.

Fawad added that once the vote of confidence is taken, the petition filed in the high court would be withdrawn and the summary for dissolving both the legislative of Punjab and Khyber Pakhtunkhwa would be sent tomorrow.

Earlier today, ruckus gripped the assembly during the third consecutive session, with the Pakistan Muslim League-Nawaz (PML-N) members chanting slogans against the ruling government in the province.

“Take a vote of confidence today,” the members demanded continuously, after which the speaker requested them to take their seats.

As the chants got louder, the speaker said: “Opposition members should remain in their seats. Your senior leadership knows about your protest”

“I’m saying for the 15th time, take your seats. Else I’ll take action according to the Constitution,” he said warning opposition lawmakers.

PML-N member Raheela Khadim Hussain refused to talk during the question break. “The governor has expressed distrust in the chief minister,” she said while requesting CM Elahi to first take the vote of confidence from the assembly.

The speaker told her that the government will take the vote of confidence. “Let the high court decide,” he said.

“If they don’t take the vote of confidence, they won’t remain in the government,” Speaker Sibtain said, asking the opposition to initiate a vote of no-confidence for a “decision”.

Members on the opposition benches then raised slogans yelling “dacoit, dacoit” when referring to CM Elahi.

When the call to prayer began, the speaker ruled for the members to calm down. “Azan is being called, fear Allah,” he said.

The political turmoil in Punjab heightened last month when the ruling coalition in the centre decided to remove CM Elahi in a bid to stop the dissolution of the assembly.

But Punjab Assembly Speaker Sibtain — a PTI leader — termed the order against the Constitution and adjourned an ongoing session till Friday — which resumed today.

Following this, in a notification issued in the wee hours of December 23, the governor de-notified Elahi as the chief minister, citing his reluctance to take a vote of confidence.

But the PTI and PML-Q alike rejected the notification and moved the LHC against it. Following this, the court reinstated Elahi and adjourned the hearing till January 11 (today).

When the LHC took up the petition today, it said the governor, during an ongoing session of the provincial assembly, was authorised to set a date for the chief minister to take a vote of confidence, which the latter would be bound to comply with.