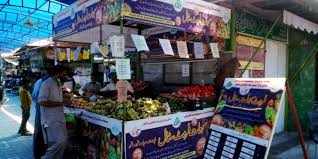 LAHORE : Punjab government has decided to establish 396 sahulat (facilitation) bazaars across the province over the directives of Chief Minister Usman Buzdar.

A review session was held under the chair of Punjab’s chief secretary for government steps for price controls. During a briefing, it was told that 223 sahulat bazaars have been made functional across the province.

The chief secretary said that 396 sahulat bazaars will be established across the province following the directives of Punjab CM Usman Buzdar.

The chief secretary also summoned a detailed report from the concerned authorities regarding the monitoring of flour mills.
Earlier on Tuesday, Prime Minister Imran Khan had given the first task to the Tiger Force volunteers for discouraging hoarding while chairing a high-level session regarding the ongoing efforts for price controls.

The participants of the session decided to launch a pilot project for controlling inflation from the federal capital Islamabad. During its first phase, 9,000 shops in Islamabad will be monitored, whereas, Tiger Force volunteers, Commission Islamabad and deputy commission will joint spot the markets and shops involved in hoarding.

In phase-wise progress, the local authorities will start monitoring of rate lists and overcharging at all shops of the city while volunteers will spot hoarders and stocks of essential commodities more than its requirements in different markets.

After getting complaints from the volunteers, district administration will take immediate action against the responsible persons involved in overcharging and hoarding. The joint actions will be listed down in a report which will be presented directly to the prime minister.

It has been decided that heavy fines will be imposed for overcharging and failure to put up rate lists.

PM Imran Khan said that the major reason for inflation is hoarding. He ordered the administration to take strict action against the elements involved in hoarding.

On Monday, PM Imran Khan had chaired a meeting to control rising inflation in the country, where it was decided to set up sahulat bazaars in Punjab province besides also launching strict action against hoarders in Punjab and KP provinces.