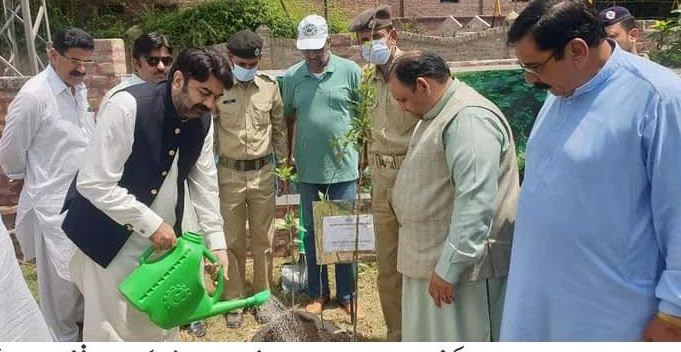 RAWALPINDI, AUG 3 /DNA/ – Punjab Minister for Higher Education Raja Yassir Humayun Sarfraz has said that the Punjab government was utilizing all available resources and channels to bridge the gap between the population of humans and forests. “We shall leave no public and private vacant land in the province sans forestation”, he added.

Raja YassirHumayunSarfraz said thatthe 10 Billion Tree Tsunami Movement of Prime Minister Imran Khan was getting popularity and admiration from all over the world which showed that our government was doing very well. He said the “Up-Scaling of Green Pakistan Program” launched by the Punjab Forest Department was a big supplemental move in this direction. The Minister vowed to leave no stone unturned for the success of the 10 Billion Tree Tsunami Movement. “Due to a big gap between human population and forests, the world is facing the serious challenges of environmental pollution and global warming”, he added. He said that our government rose to the occasion in this direction and took its responsibilities seriously to lessen the gravity of this challenge. “The Chief Minister Punjab sardarUsmanBuzdar has directed the Punjab Forest Department to involve all farmer communities in tree plantation campaigns and extend its expertise to them for bringing all vacant and barren lands under cultivation”, he mentioned. For this purpose, he said, the government shall provide all kinds of financial and technical support to the farmer.

District Range Forest Officer (Extension)ChakwalSherAfzal Rajamade the minister aware of the details of the tree plantation campaign and told that hundreds of acres of barren land of farmers had been turned into dense potential forests.“The Punjab Forest Department is bearing all the expenses for the resettlement of all the barren lands in the division with trees”, he added. He said that this scheme was a part of the success of Prime Minister Imran Khan’s Ten Billion Tree Tsunami Movement and Forest Department employees had been working on it day and night. The Minister praised the efforts of the department and advised the officials to continue their efforts till the productive results are achieved.