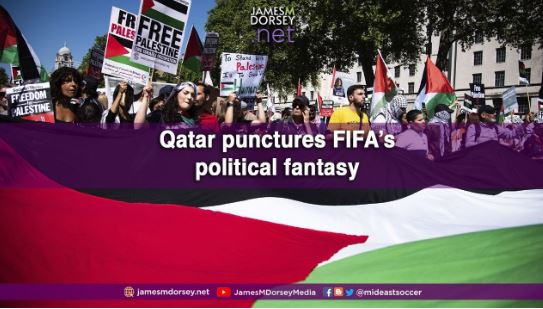 If the Qatar World Cup proved anything, it’s that sports and politics are inseparable Siamese twins joined at the hip.

Politics popped up at every twist of the World Cup’s road, whether related to the right of freedom of expression of players, sports commentators and fans; anti-government protests in Iran; anti-Israeli sentiment among Qataris and Arabs; a backlash against Western, particularly German, critics of Qatar; or ultra-conservative religious rejection of soccer as a sport.

Qatari efforts to stage manage the intrusion of regional politics ranged from picking and choosing which protests fit its foreign policy agenda to seeking to ensure, where possible, that events elsewhere in the region would not overshadow or inflame passions during the World Cup.

Palestine is a case in point.

Amid escalating violence between Israelis and Palestinians, Mohammad al-Emadi, the Qatari official handling Hamas, the Islamist group that controls the Gaza Strip, travelled to the region to ensure that it and Islamic Jihad, another Gaza-based organization, would not respond with rockets to Israeli use of lethal force against Palestinian militants on the West Bank.

Qatar feared that a response to last week’s killing of an Islamic Jihad commander on the West Bank and near-nightly Israeli raids could spark a renewed Israeli intervention in Gaza, already crippled by a 15-year-long Israeli-Egyptian blockade.

The Qatari pressure puts in a different perspective the Gulf state’s endorsement of expressions of support for the Palestinians during the World Cup in the form of pro-Palestinian flags and T-shirts and a refusal by Qatari and Arab fans to engage with Israeli reporters covering the tournament.

Despite refusing to follow in the footsteps of the United Arab Emirates, Bahrain, Morocco, and Sudan in recognizing Israel without a resolution of the Israeli-Palestinian conflict, Qatar has a long-standing working relationship with the Jewish state that serves the interests of both countries.

The Gulf state, often at Israel’s request, has pumped millions of dollars into paying government salaries in Gaza, providing aid to thousands of families affected by past wars, and funding fuel for the Strip’s power plant as well as infrastructure projects.

Moreover, Qatar became the first Gulf state to put money into Israel when it funded in 2006 a six-million-dollar stadium in the predominantly Israeli Palestinian town of Sakhnin, an investment long before the UAE-led Arab recognition of the Jewish state 14 years later.

Sakhnin and the Doha Stadium are home to Bnei Sakhnin, Israel’s most successful Israeli-Palestinian club.

As a result, allowing expressions of pro-Palestinian sentiment during the World Cup served multiple Qatari purposes.

It gave a release valve to Qataris, a minority in their own country, who were concerned about the impact on their society of the government’s live-and-let-live approach towards soccer fans with very different cultural values visiting their country during the World Cup.

Preventing fans from taking pro-LGBT paraphernalia such as One Love and rainbow-coloured armbands and shirts into stadiums served a similar purpose.

It also allowed Qataris to vent their frustration at perceived double standards in European and American criticism of Qatar’s rejection of LGBT rights, particularly after the German team’s hands-over-mouth gesture in protest against FIFA’s denial of their right to wear pro-LGBT armbands.

In one instance, Qataris wore pro-Palestinian armbands of their own to a match as a protest against the donning of a pro-LGBT One Love band by German Interior Minister Nancy Faeser, who attended the game.

Expressions of pro-Palestinian, anti-Israeli sentiment also suggested that Qatar’s refusal to recognise Israel was more in line with Arab public opinion than efforts to project the UAE-led recognition of the Jewish state as genuinely popular and indicative of a drop in support for the Palestinian cause.

If anything, recent polls show that public support for establishing diplomatic relations with Israel had fallen across the Arab and Muslim world, including in countries that normalized their ties to the Jewish state.

In Bahrain, 20 per cent of the population supports the accords, compared with 45 per cent in 2020, according to a Washington Institute for Near East Policy poll in July. Support in Saudi Arabia fell from 41 to 19 per cent. Even in the UAE, where normalisation had the greatest impact, support dropped to 25 per cent this year from 47 per cent in 2020.

For Qatari World Cup managers, Palestine was low-hanging fruit. Protest against the government in Tehran was a far trickier challenge.

A regional behemoth, Iran is a partner as well as a potential threat with which Qatar shares the world’s largest offshore gas field.

Maintaining relations with Iran has allowed Qatar, at times, to be a background mediator with the United States on issues like the moribund talks to revive the 2015 Iranian nuclear agreement.

Qatar feared that allowing stadiums to become venues of confrontation between opponents and supporters of the Iranian government could have persuaded Iran to rank the Gulf state, alongside Saudi Arabia, Israel, and the United States, as an instigator of sustained anti-government protests in which security forces have killed hundreds.

As a result, Qatar sought to prevent anti-government banners, T-shirts, and pre-revolution flags from entering stadia. The problem resolved itself when Iran was knocked out of the World Cup in the group stage.

Yet, the larger issue remains. The Qatar World Cup demonstrates that FIFA’s insistence that sports and politics can be separated amounts to a political fantasy.

More concerning than that, it enables FIFA and autocratic World Cup hosts like Qatar to decide what are convenient and inconvenient expressions of politics. That hardly makes for a level playing field, the starting point for any sport.