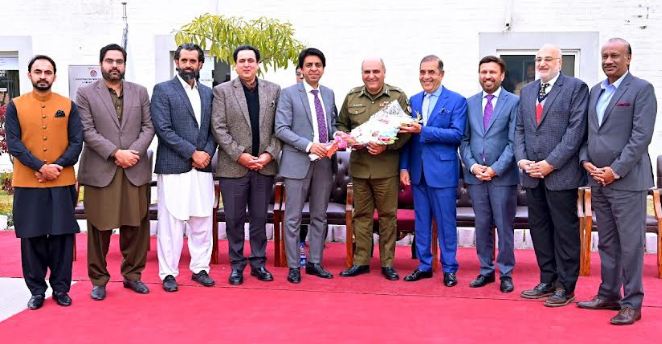 Rawalpindi: Punjab Police close cooperation with the business community is vital as the business community plays an important role in running the country’s economy. Traders are the backbone of the country’s economy. To improve close liaison and cooperation with the police, the Chamber Police coordination committee will be formed.

These views were expressed by IG Punjab Amir Zulfiqar Khan while talking to the delegation of Rawalpindi Chamber of Commerce in Rawalpindi Police Lines during his visit to Rawalpindi here on Friday. IG Punjab also issued instructions to Regional Police Officer Nasir Mahmood Sati and City Police Officer Shahzad Nadeem Bukhari regarding the formation of the Police Liaison Chamber Committee.

On this occasion, Chamber President Saqib Rafiq said that the Alternate Dispute Resolution Committee (ADRC) should be re-activated. He stressed on taking concrete steps on ending street crimes in the city and assured that RCCI will provide all kinds of assistance and cooperation with Police for maintaining law and order situation in Rawalpindi City. He also urged for early completion of the safe city project.

Group leader Sohail Altaf said that the economic situation is worsening  that ultimately deteriorating  the the law and order situation which should be controlled, and effective measures should be taken, the interaction between the police and the business community is very important, he said that Rawat Industrial There is a need to activate the police post established in the state, in this regard the police will be coordinated.