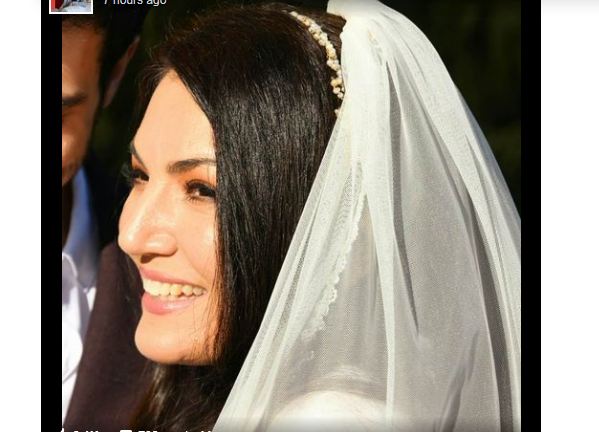 LAHORE – Reham Khan, ex-wife of former prime minister Imran Khan, has tied the knot for the third time. She announced her wedding on Twitter and shared a picture with a caption “just married”. Sharing the details about her marriage, Reham penned a note in which she also introduced her husband Mirza Bilal. “I am delighted to share the good news with my followers & well-wishers that I have tied the knot in a simple marriage ceremony with Mirza Bilal. In the absence of my parents I want to request you for your prayers and kind wishes as I embark on my new life.”

“Life is about love and understanding, and after a very long lonely struggle I finally met a man who impressed me with his intelligence and won me with his honesty and his composure. Although Mirza is a good 13 years younger to me, he is the sage in my life. A man I can trust. A man who will be around me in my darkest hour. A man who I feel safe with,” she added.

She further wrote, “Like you have welcomed me in your hearts and prayers, I am sure you will extend the same warmth to the man who I have chosen to share my life with. I would like to thank Mirza’s parents for warmly welcoming me into their beautiful family, and my children for being supportive as always. Special thanks to my son for fulfilling duties of being my Vakeel.”

She also hoped that it will be third time lucky for her. “I would politely request you to respect the privacy of our respective immediate families and our children,” she said.

Reham got married for the first time in 1990 and got divorced in 2005. She has three children from her first marriage.

Her second marriage with Pakistan Tehreek-e-Insaf (PTI) chairman was announced in 2015 but it was also reported that they got hitched in Oct 2014. They got separated after a few months of marriage.