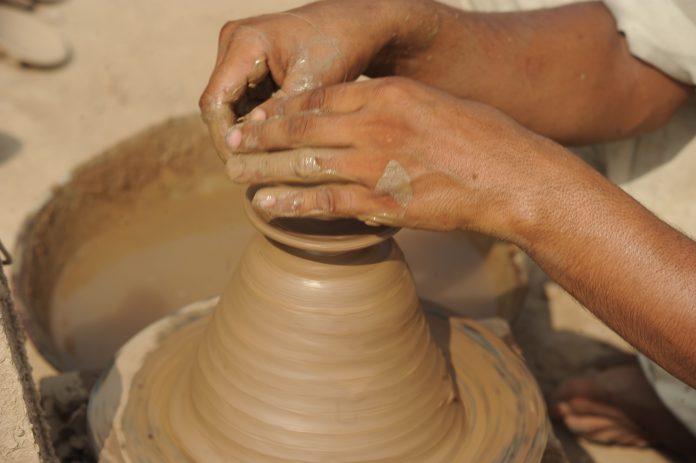 Making pottery doesn’t just take much effort but also have to stay calm. And then I saw small pottery being made I wondered if it were just hard work so everyone would do it.

FAISALABAD: If you go back in past, where the potter’s Relationship Began. Iran is said to be the first pottery in Asia Became four thousand years old. First Iranian potters started making pots, then the clay and pottery reached Baluchistan and the Indus Valley.

When the potter’s wheel turns sharply and fingers are smelling of wet and smelly mud In these moments, if you look with the eyes of the heart So this wet mud and soaked Fingers

And then the relationship of clay and hands give this art a new dimension. This art set up camp everywhere where man breathed. This was said by Farzana Siddique, a potter

That our whole family makes pottery, our children. They start making pots from childhood by playing with clay as long as they grow up so they become great potters. We don’t find it difficult to teach pottery a potter. An artisan from Pottery Making on Sheikhupura Road His name was Siddique

(Potters are called Pottery Making in Pakistan because of their work) Making pottery doesn’t just take much effort But also have to stay calm. And then I saw small pottery being made I wondered if it were just hard work so everyone would do it. But apart from hard work here keep calm you have to trust your hands, and the important thing is that the soil is respected here. If you want to see the dignity of the soil it should be seen in these courtyards of potters where pots are made. And then with that respect comes the sugar of love. When we need the soil so the eyes do not move away from the dust.

And what a man loves how can she look away from it then when pots of different shapes from this clay such as chaati, tus (in which flour is kept) Kane (curry cooking pot), children’s toys, Pots and pans are made of chalk, so you have love in those fingers and eyes, Love and compassion will be seen.

Still older people to stay healthy. They like to drink water from earthenware because the jars do not heat up in the heat,

I asked an old man named Muhammad Ehsan said in a happy mood is it true that forty or fifty years ago today  when weddings took place, you would provide all the utensils what a day that was.

The first address to get married was to a local potter, who is getting married? Before the wedding, the girl’s family used to come to Kumar’s house to make utensils In the village, all the utensils were given at the weddings of the girls At that time villagers and artisans would be very strong in the middle of there was a relationship Craftsmen such as carpenters, blacksmiths, barbers, potters, etc. provided their services to the villagers free of charge throughout the year. And when the crops are ready

All of them were paid in the form of grain. The hardest work would have been for the ‘potters’. They sayThat’s when a pot reaches your hands So it goes through more than fifty stages.The reward that the potter received for his hard work and love for the soil is also highly esteemed. And since it’s steel and plastic Diseases have come in people Has also increased tremendously.