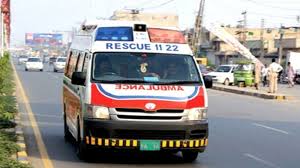 RAWALPINDI, Oct 14  : Punjab Emergency Service, Rescue 1122 has been provided sense of safety to the citizens of Pakistan from October 2004 to 2020 till to date during I6 years of service to humanity.
On Wednesday, the Rescue Service had completed 16 years of serving to humanity and this Service was necessitated after failure of repeated attempts to revitalize and modernize the old organizations mandated for emergency management.

Recall the past memories, when there was no ambulance, fire and rescue services. People were suffering due to unavailability of timely and professional assistance in emergencies, many lives and property loss was routine matter. This helplessness turned into strength after a comprehensive integrated emergency management system of Punjab Emergency Service with name Rescue 1122. Rescue Service gained public trust with several years of the continuous services to humanity and now a lot of achievements are on record.

The Service was started by Dr. Rizwan Naseer with political ownership and support of then Chief Minister Ch. Pervaiz Elahi. The Punjab Emergency Service Act 2006 was also unanimously passed from Punjab Assembly to provide legal cover to the Emergency Services.

Now the Rescue Service has become the leading emergency service of South Asia after getting international certification from United Nations in the field of Search and Rescue.

The Service started from city of Lahore has been expanded in all 36 districts of Punjab and is being replicated down to tehsil level and other provinces of Pakistan except Sindh Province.

During this span of time, despite of all challenges over 8.6 million victims of emergencies were rescued, first modern Fire Rescue Service was established and responded over 150,000 fire incidents, saved worth over 450 billion losses with timely emergency response and professional firefighting, Motorbike Ambulance Service set new standard of emergency response dealt over 600,00 emergencies in 9 divisional headquarters with average response time of 4 minutes, Patient Transfer Service was provided to over 800,000 patients from lower health facility to higher health facility.

The Service established Community Emergency Response Teams in all Union Councils of Punjab and trained over one million first aiders to promote safety through volunteerism. The Rescue Service is continuously striving to serve as per its mission statement “development of safer communities through establishment of an effective system for emergency preparedness, response and prevention”. Citizens are being provided with the basic right to timely emergency care without any discrimination.

As this was a unique initiative in 2004 so Emergency Services Academy was also established to develop train human resource. Pioneer team of Rescue Service Headquarters and districts burns their midnight oil to establish an exemplary model of Emergency Service in Punjab.

This Academy also conducted 3 National Community Emergency Response Teams Challenge to promote volunteerism and support Community Safety Program of the Service.Finally it is great honor for the country that Pakistan Rescue Team of Emergency Services Academy has become the first United Nations INSARAG certified disaster response team in South Asia. It is pertinent to mention that all officers and employees are grateful for the great ownership of Ch. Pervaiz Elahi, contribution of the Governor Punjab Ch. Muhammad Sarwar and former government who expanded this Service in all districts and regularized employees in their tenure.

This journey was full of challenges as a lot of transition phases came but the Service maintained its standard to serve humanity without any discrimination.

The history of 16 years of Rescue Service is incomplete without the great services of Rescue Shuhada who lost their lives in the line of duty. Salute to all of them. Thanks to the Government of Pakistan for presenting them Gallantry award to four Shaheed Rescuers of Ghakkar plaza Operation and Sitara-i-Imtiaz to Founder Director General and Tamga-e-Imtiaz to Rescue Officers.