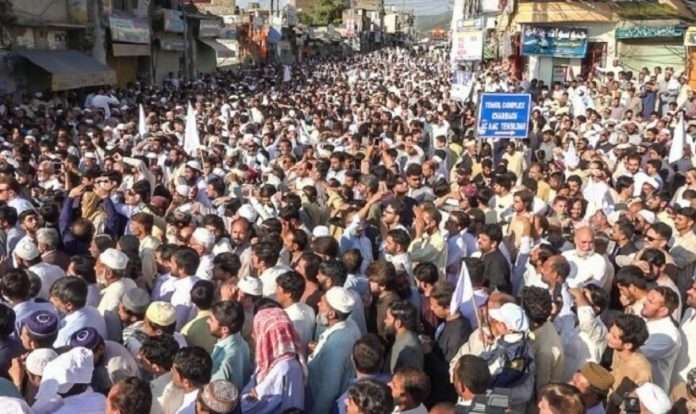 SWAT, OCT 14: The locals of Swat’s Charbagh tehsil and Shangla’s Alpuri took to the streets on Friday in continuation of their series of protests against the spate of terrorism in the scenic valley, demanding authorities clamp down on elements ruining the peace in the area.

The protest was organised by a local organisation, Swat Qaumi Jirga, while elders, youth, and children from different parts of Charbagh tehsil took part in the demonstration, carrying placards inscribed with slogans seeking the restoration of peace in the valley.

During their protest last week at Matta Chowk in the Khwazakhela tehsil of Swat, the protesters had warned that they might take up arms to tackle terrorists if the authorities failed to play their due role.

It was the eighth protest today by the locals since the resurfacing of the terror activities in the month of August. The most recent protest was on Tuesday, after a school van in Charbagh came under gunfire, leaving the driver dead and two children injured.

The incident triggered a protests in several parts of Khyber Pakhtunkhwa, with thousands taking to the streets to show their resolve against terror.

The protest eventually ended after 40 hours after negotiations with the administration.

The protesters had been demanding the arrest of the culprits behind the attack and warned of marching to Islamabad if authorities failed to meet their demands within 24 hours.

The speakers were of the view that their demonstrations will continue until the elimination of the last terrorist from the valley.

In his remarks, Muqam said: “The PML-N will never compromise on peace in Swat.”

We are against all forms of terrorism and we are standing with the people of Swat for peace, he added.

“I must underline that the people of Swat are not alone and the leadership as well as every worker of the PML-N in the entire country is standing with them,” he told the protesters.

A speaker said that the people of Swat have “woken up” and are entirely aware of right and wrong and bad and good.

Another speaker, Mukhtiar Yousafzai, said the locals have decided they would not breathe freely until terrorism was completely eliminated from Swat.