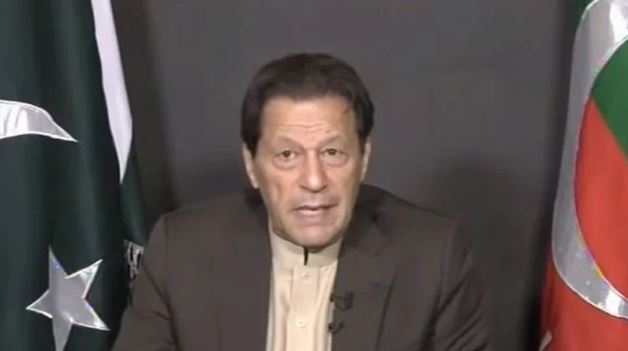 ISLAMABAD: Some retired officers during their days of Imran Khan’s political support had ‘managed’ a delay in the Election Commission of Pakistan’s handling of Pakistan Tehreek-e-Insaf’s (PTI) foreign funding case, a report published in The News on Tuesday said.

An informed source, who was closely monitoring what was going on behind the scene during those days, however, insisted that there was no pressure on the ECP to decide the foreign funding case against the PTI as alleged by Imran Khan.

Imran Khan has repeatedly said that the ECP was ‘told’ to decide cases against him and his party. On the contrary, the source said, retired officers had played their role in delaying the PTI’s foreign funding case. Later, the ECP was left on its own to decide the case on its merits.

The PTI’s foreign funding case was filed in November 2014 when the party’s founding member Akbar S Babar alleged gross financial irregularities in the party’s funding from both Pakistan and abroad.

There has been an extraordinary delay in deciding the case. This delay, the source said, was caused by the influence of the retired officers.

According to the timeline of the PTI’s foreign funding case as recently reported by the Daily Dawn, Babar filed a petition with the ECP seeking an investigation into financial malpractices of the PTI funding on Nov 14, 2014.

On Jan 14, 2015, the ECP issued notice to Babar asking him to appear before the commission and present evidence in support of his allegations.

On December 1, 2016, the ECP asked PTI to submit the documents relating to its foreign funding or face consequences. The then CEC also held the PTI responsible for delays in proceeding with the case.

On March 22, 2017, the ECP adjourned the hearing of the case after reprimanding the party’s counsel for seeking yet another adjournment.

On April 3, 2017, the PTI counsel finally appeared before the ECP but only to challenge the Commission’s jurisdiction to hear the matter.

On May 8, the ECP rejected PTI’s plea challenging the commission’s jurisdiction in the case. The ECP fixed May 17 as the date for the regular hearing of the case. On Sept 11, 2017, the ECP gave the PTI another opportunity to submit financial documents and details of funds received.

On Sept 17, 2017, after months of delay, the PTI finally submitted details of the party accounts and foreign funding received in the last seven years to the ECP.

On March 27, 2018, the ECP formed a three-member scrutiny committee to investigate and audit the PTI’s accounts and complete the scrutiny within a month.

On May 9, 2018, the PTI changed its lawyer as Babar Awan replaced Anwar Mansoor Khan.

On May 16, 2018, the PTI applied with the ECP seeking secrecy of the scrutiny of its foreign funding.

On May 30, 2018, the ECP rejected PTI’s appeals to restrain the scrutiny committee and for the secrecy of the scrutiny process.

On Oct 2, 2018, the PTI counsel Babar Awan withdrew from representing the party in the case.

On Oct 1, 2019, the ECP reserved its verdict on four applications by the PTI seeking secrecy in the scrutiny process.

On Oct 10, 2019, the ECP rejected PTI’s applications for secrecy and directed the scrutiny committee to continue its investigation into the case.

On Sept 21, 2020, the ECP trashed the report submitted by its scrutiny committee. In its order, the commission said that the report was neither complete nor well-detailed.

On Jan 14, 2021, the opposition alliance decided to march to the ECP office in Islamabad to protest in front of the electoral body and to demand a quick verdict in the case.

On Jan 20, 2021, as the opposition held protests and criticised the ECP for delays, the then prime minister Imran Khan called for an open trial and challenged the leadership of all opposition parties to face proceedings too.

On Feb 18, 2021, the PTI released details of millions of rupees of funds transferred from the UK to the party’s account last year.

On March 16, 2021, the ECP issued notice to PTI and its scrutiny committee to explain their position on the secrecy of scrutiny in the case.

On April 9, 2021, the petition demanded the ECP committee validate the authenticity of documents presented by the PTI in presence of both parties.

On Nov 30, 2021, the scrutiny committee submitted another report to the ECP after a delay of six months from the last deadline.

On Dec 9, 2021, the ECP deferred a briefing by its DG Law on the case because of the absence of one commission member from Balochistan.

On Jan 4, 2022, the damning report compiled by the scrutiny committee confirmed the PTI received funding from foreign nationals and companies, underreported funds and concealed a number of its bank accounts.

On Jan 19, 2022, the ECP ordered the declassification of all critical documents linked to the foreign funding case.

On April 23, 2022, the PTI moved the Islamabad High Court seeking the scrutiny of the funds of at least 17 major political parties including the PMLN and PPP.

On May 18, the IHC questioned the ECP over the eight-year delay in coming to a conclusion and announcing a verdict on the prolonged case.

On June 15, 2022, the PTI counsel’s long request of referring to the case as “prohibited funding” and not “foreign funding” was accepted by the CEC. The same day, the PTI asked ECP to decide all funding cases at once.

On July 29, 2022, the Financial Times published a report revealing that tycoon Arif Naqvi organised a charity cricket match, whose proceeds were used to bankroll the PTI.

On July 30, 2022, Imran Khan insisted that all funds from Arif Naqvi came through banking channels and were disclosed.

On Aug 1, 2022, the ECP announced that it would release its verdict in the case the following day.

On Aug 2, the CEC Sikandar Sultan Raja pronounced verdict and found that PTI received prohibited funding and issued a show cause notice to PTI on why the Commission shouldn’t seize the funds.