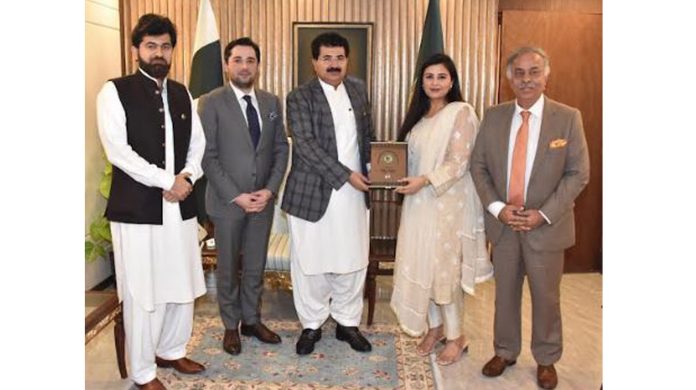 Lauds the role of PWCTA, USPICC in promoting trade PWCTA to hold a single-country exhibition in Canada

Chairman Senate Muhammad Sadiq Sanjrani has said that Canada is a very important market for Pakistan and the government will facilitate all the businesspersons who want to play their role in the improvement of bilateral trade relations between Pakistan and Canada.

Improved trade ties between Pakistan and Canada will serve the interests of both countries therefore the business community should try its best in this regard, he said.

He lauded the decision of PWCTA to organize a single-country exhibition in Vancouver in May 2023 in which over 200 businessmen from Pakistan will heavily participate while women entrepreneurs will get special discounts.

Mr. Sanjrani said such events will not only promote exports but also improve the image of the country in the western world.

At the occasion, Bushra Rehman informed that the exhibition will showcase Pakistani products such as textiles, rice, sports goods, surgical instruments, shoes, and IT products. A number of potential importers from the North American region will also be attending the event.

USPICC will fully cooperate with PWCTA to promote Pakistan’s trade with Canada and other countries and its members will participate the in single country exhibition in Vancouver, said Muhammad Ahmed.

Secretary General USPICC and PWCTA Malik Sohail Hussain said that there are 500,000 Pakistani working in different fields in Canada serving as a bridge between both countries. These people are not only playing an important role in the development of Canada but also sending valuable foreign exchange to Pakistan, he added.

Malik Sohail will also coordinate with all the related bodies and keep all sides informed about the latest developments.