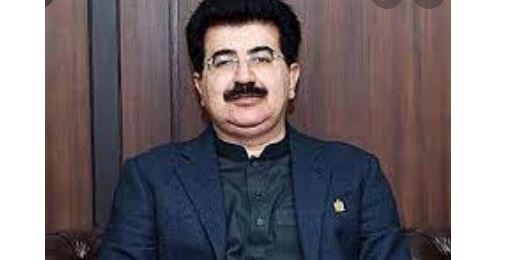 ISLAMABAD, JUL 15 /DNA/ – Chairman Senate Sadiq Sanjrani paid homage to martyred Lieutenant Colonel Laiq Baig Mirza who was martyrdom in line with his duties for national defense and prayed for the elevation of high ranks and patience to his family to bear this loss.

Sanjrani said that the sacrifices of these brave grandsons of the motherland for the defense of the beloved country would not go in vain. “The sacrifices in the war on terror are unparalleled and we are determined to end the scourge of terrorism” Sanjrani emphasized.

Chairman Senate while severely condemning the incident said that the sacrifices of brave soldiers would further strengthen our resolve to fight against terrorism. Muhammad Sadiq Sanjrani said that the martyred Lieutenant Colonel Laiq Baig Mirza has embraced martyrdom by crushing the nefarious intentions of anti-national elements. “Cowardly acts of the terrorists cannot shake the resolve of the Pakistani nation” he added.

Deputy Chairman Senate Senator Mirza Muhammad Afridi, Leader of the House in the Senate, Senator Azam Nazeer Tarar and Leader of the Opposition in the Senate Senator Dr Shehzad Waseem also prayed for the elevation of ranks of martyred Lieutenant Colonel Laiq Baig Mirza and prayed to grant patience to his family. They in their separate messages expressed that the sacrifices made by the Pakistan Army against terrorism are unrivalled and incidents of terrorism cannot demoralize us.