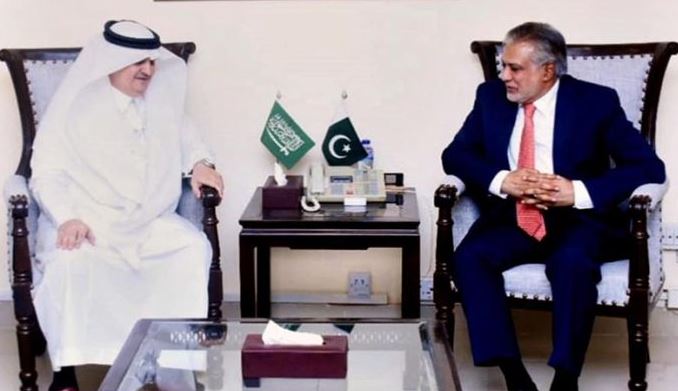 During the meeting, Ishaq Dar felicitated the ambassador on Crown Prince Mohammad Bin Salman’s designation as Prime Minister of the Kingdom of Saudi Arabia, a Finance Ministry press release said.

The finance minister highlighted the long-standing bilateral relations between Pakistan and Saudi Arabia in various areas.

He said the two countries had exceptional relationships based on social, political, religious and cultural ties.

Dar expressed deep gratitude for the firm support of the Saudi government in pursuing investment projects in Pakistan.

He thanked the ambassador on allowing rollover of $3 billion deposits. He also thanked the Saudi Fund for Development for their valuable investments in different sectors of Pakistan’s economy.

The ambassador acknowledged the long-term relationship and shared the focus of the Kingdom of Saudi Arabia on continuation of mutual investment projects within Pakistan.