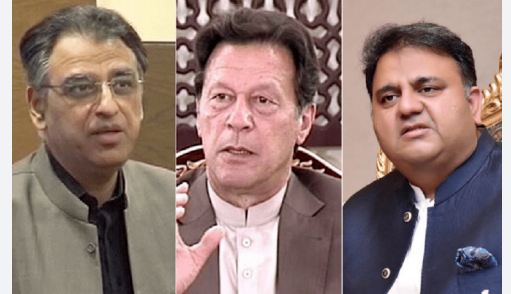 ISLAMABAD, JAN 3: The Supreme Court (SC) on Tuesday allowed the Election Commission of Pakistan (ECP) to continue its proceedings against former premier Imran Khan, and his party leaders Asad Umar and Fawad Chaudhry, in cases related to the contempt of the electoral body.

The orders were passed by a three-member SC bench, headed by Chief Justice Umar Ata Bandial and comprising Justice Athar Minallah and Justice Ayesha A Malik.

The ECP had during August and September last year issued contempt notices, in exercise of its powers of contempt, against PTI chief Imran Khan and party leaders Asad Umar, Fawad Chaudhry, Mian Shabbir Ismail and Danial Khalid Khokhar for allegedly using “intemperate” language against the chief election commissioner and ECP and asked them to appear in person or through their counsels before the commission to explain their position.

However, instead of appearing before the ECP, the PTI leaders challenged in various high courts the ECP notices and contempt proceedings on the grounds that Section 10 of the Elections Act 2017, which is the statutory provision regarding the commission’s power to punish for contempt, was against the Constitution.

The PTI leaders had also sought from the high courts a declaratory relief from the charges.

Later, a petition was moved through Advocate Sajeel Sheryar Swati on behalf of the ECP with a request to order consolidation of all six petitions before one high court instead of defending the commission’s stance over the issuance of contempt notices against PTI leaders in different high courts.

At the previous hearing, the top court had directed the high courts hearing petitions filed by the PTI against the ECP to quickly decide on the matter.

The seven-page document issued today, a copy of which is available with Dawn.com, said that the proceedings initiated by the electoral body under Section 10 of the Election Act, 2017, against the respondents “have been allowed to continue”.

“But ECP has been hereby restrained from passing final orders under the said section.”

The order highlighted that the high courts had not stopped the commission from proceeding in the matter initiated by it and the respondents had raised objections about the “alleged incompetence” of the officer who had issued the show cause notices.

“As these objections have been raised in the pending proceedings under section 10 before the ECP, the same are required to be considered and decided by it before passing any final order.

“We hold that the petitioner [ECP] may continue its proceedings in accordance with law including, by decisions on the objections raised on behalf of the respondents,” it added.

The order also maintained that the operation of a statutory provision must not be interrupted by a court of law. “[…] Unless a statute or statutory provision is finally declared to be ultra vires the Constitution, its normal operations can be curtailed by an interim order.”

Subsequently, the top court disposed of the ECP’s petition.

Separately, the electoral watchdog also warned the PTI leaders of issuing their arrest warrants if they failed to appear before the commission on January 17 to face the contempt proceedings.

A four-member ECP bench heard the case on Tuesday.

During the hearing, Imran and Fawad’s counsel, Ali Bukhari, contended that the latter’s mother was ill and was undergoing treatment at a hospital in Lahore.

He further said that Fawad’s brother, Faisal, was the PTI’s lawyer in the case. “Both the brothers are with their mother”.

He added that the PTI chairman, who is still recovering from the bullet wounds he sustained in an attack in November, had not yet been given the all-clear to travel.

Meanwhile, Umar’s lawyer, Advocate Anwar Mansoor, said that his client had intended to attend the ECP hearing but was unable to do so. Advocate Mansoor assured the ECP that they would respond to the show cause notice at the next hearing.

At one point, a member of the ECP bench said that the commission would issue arrest warrant to ensure the attendance of the PTI leaders. However, the lawyers for the PTI leaders pleaded the ECP to grant a final chance for them to appear in person.

The hearing was subsequently adjourned till January 17.