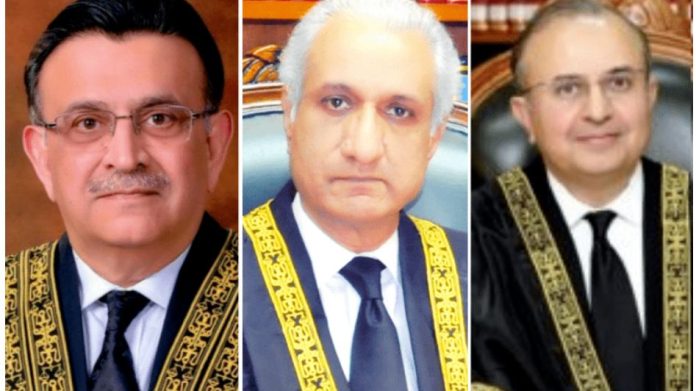 The Supreme Court on Tuesday, while issuing notices to the federation, law secretary, attorney general and the National Accountability Bureau (NAB) in connection with PTI Chairman Imran Khan’s application challenging the amendments to the NAB Ordinance, asked the party why it did not raise its objections in parliament.

It asked PTI Vice-Chairman Shah Mahmood Qureshi why his party did not raise its objections when the bill was passed, with the chief justice remarking that there was “no alternative” to parliament.

At the outset of the hearing, the chief justice asked Imran’s lawyer Khawaja Haris whether the amendments to the ordinance were supported by judgements. Haris replied that they were in contradiction to Supreme Court judgements, not in line with them.

Justice Ahsan observed that “many” amendment bills were passed in haste.

Haris said the court would have to consider the United Nations Convention against Corruption while hearing the case.

“Majority of the cases are related to the misuse of power or assets beyond means,” he told the court, adding that after the amendments, a case cannot be made unless the person in authority himself benefits in some way.

At this, Justice Shah asked whether lawmakers should not be allowed to use their privileges. “If parliament declares tomorrow that murder is not a crime, will it be allowed?” questioned Haris in return.

Justice Shah then asked whether the court could overturn the law should parliament abolish the death penalty to which Haris replied that it was a different matter.

“When the matter is related to corruption and the national treasury, it becomes a question of fundamental rights. If a patwari steals someone’s money, action is taken against him. Should action not be taken against a powerful man?” the counsel asked.

Chief Justice Bandial pointed out that the amendments had not abolished the misuse of authority from the list of crimes. He then asked Haris to inform the court first of the amendments which he believed to be in violation of fundamental rights.

“Can the legislative powers of the parliament not be reviewed by the courts? Can a law benefitting certain people not be challenged?” asked Justice Ahsan.

He observed that retroactive application of the amendments to cases dating back to 1985 would mean they would all be disposed of.

Haris argued that it was the public’s right to ensure that their representatives did not misuse their authority. “Misuse of authority is [still] a crime but it has been made impossible to prove it.”

Accountability courts could no longer accept information received from foreign countries as evidence, he said.

Haris argued that all cases related to fake accounts would end after the amendments.