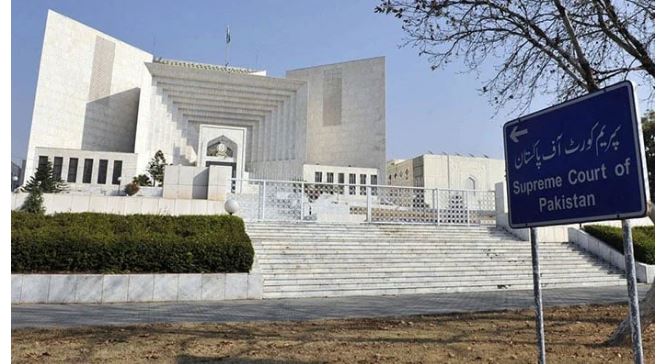 The orders were issued by the Supreme Court while hearing the contempt of court plea filed against the former prime minister by the government over his long march to Islamabad.

At the outset of the hearing, Justice Bandial condemned the assassination attempt on Khan’s life and asked his lawyer Salman Akram Raja whether an FIR was registered as of yet.

“I am not aware about the FIR. An attempt was made to register an FIR but I don’t think it has been registered as of yet,” said Raja.

At this, CJP Bandial lamented that it’s been more than 90 hours since the attack took place and the FIR was yet to be registered. The delay in the registration of the FIR means that the police investigation has not begun as of yet.

“If the police did not investigate, the evidence may have been destroyed at the crime scene. This way the evidence of the case will be controversial and will be unacceptable in court,” said the CJP.

At this point, IG Shahkar appeared before the bench.

“I have heard about your achievements at the international level, register the FIR and inform us about it,” the CJP to told the cop. He also directed the province’s top cop to keep on working, assuring that if someone would intervene the court would look into it.

The top judge of the country also directed the Punjab Police chief to assign an honest officer to investigate the attack on Imran Khan.

“We have seen your resignation. The court assures you that no one will intervene in actions taken by you as per the law,” said the CJP.

At this, the IG informed the court that Punjab Chief Minister Pervez Elahi had some objections to the registration of the case.

“The registration of the case has some political angles to it but the police also have authority,” said Shahkar.

Justice Bandial directed the Punjab Police chief to keep working as per the law. He added that if there is a delay in the registration of the FIR then they will take up the case as a problem in the criminal justice system.

“For now, we are not taking suo motu notice but if an FIR is not registered within 24 hours then we will take suo motu notice,” remarked Justice Bandial.

During the course of the hearing, PTI Senator Azam Swati also appeared in court.

Upon seeing him, the CJP remarked that what happened to him was “very painful”.

“Your case is ongoing in Human Rights Cell. The court is careful in this matter, the case will be seen according to the law,” said the CJP. He also told the senator that he never stayed at in Supreme Court’s rest house.

The top judge of the country also directed PEMRA and PTA to remove the alleged video of the senator.

SC to summon report from investigators in Kenya

“An Investigation team has gone to Kenya for probe. We are summoning a report from the commission,” said the CJP. He added that once the material comes then it will be easy for them to provide assistance, saying that without evidence the court will keep moving its head here and there.

The delay in the registration of the FIR on Imran Khan’s attack, Azam Swati’s alleged video and Arshad Sharif were taken up by the CJP during the hearing of the contempt plea filed against the PTI chief.

On October 13, the federal government filed a contempt of court plea against PTI Chairman Imran Khan in the Supreme Court over his long march call to Islamabad.

In its petition, the federal government told the apex court that the PTI chief is making announcements of marching towards Islamabad, which was a violation of a court order.

“Imran Khan is making announcements to attack Islamabad,” says the plea. It urged the top court to direct the PTI chief to ensure the implementation of its orders related to protests and sit-ins.

The petition has been filed by the interior ministry on behalf of the federal government.