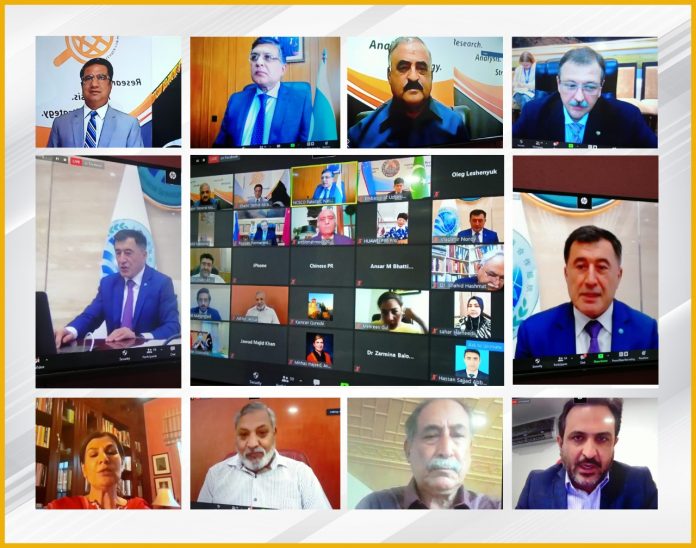 Secy General Says several of my speeches and interviews have been published in leading Pakistani newspapers; thanks CGSS for hosting webinar

ISLAMABAD:  Shanghai Cooperation Organization (SCO) Secretariat, Beijing, China and Center for Global & Strategic Studies (CGSS), Islamabad jointly organized a Webinar “SCO: A Gateway to Regional Cooperation & Integrated Development”. Vladimir Norov, Secretary-General SCO was the Chief Guest at the occasion and it was his first ever interaction in Pakistan at a Webinar.

Brigadier Akhtar Nawaz Janjua (Retd), Senior Member Advisory Board CGSS commenced the session and stated that it is the first time that His ExcellencyVladimir Norov is interacting with people of Pakistan and it is an absolute honor for CGSS that His Excellency has accepted our invitation and chose this platform to express his views and thoughts.

Vladimir Norov, Secretary-General, Shanghai Cooperation Organization (SCO) Secretariat, Beijing, China thanked CGSS and stated that CGSS is working in close collaboration with the SCO member countries for strengthening diplomatic relations and takes an active part in the activities of the SCO Forum.

He added that this year marks the 15thanniversary of the Forum’s establishment. During this period this mechanism has proved to be an important platform for dialogue between research and analytical institutions of the SCO Member States. We appreciate the close contacts of the SCO Secretariat with representatives of Pakistani think tanks and mass media. Over the past two months, several of my speeches and interviews have been published in leading Pakistani newspapers. It is gratifying that these publications arouse the Pakistani public’s interest in the SCO.

He stated that the current profile of the Organization SCO is one of the key mechanisms of security and stability in the Eurasian region. Moreover, today the SCO has become, without exaggeration, an integral element not only of regional but also of international policy and security.The potential of the SCO has increased and the desire of many other countries to become members of the Organization is an indication of its growing credibility in the world.

He further highlighted that currently, SCO member states account for about 20% of the global GDP and more than 40% of the world’s population, thus representing the most powerful and densely populated transcontinental Organization. The leaders of SCO States have repeatedly stressed that no matter how the international situation changes, Member States will firmly follow the “Shanghai spirit”, stand firm in upholding the concept of equal, open and mutually beneficial cooperation, and strive to maintain regional peace, stability, and prosperity. In this regard, he stated that “I am very much impressed by the words voiced by Prime Minister Imran Khan at the Bishkek SCO Summit last year, that, the SCO is a complete expression of our historical roots”. He emphasized that Pakistan actively participates in all SCO mechanisms and is contributing to the development of the Organization.

He added that SCO’s commitment to political and diplomatic settlement of conflicts is based on strict compliance with universally accepted norms and principles of international law. First of all, practical work is carried out based on the SCO Regional Anti-Terrorism Structure, which demonstrates significant results in countering terrorism, separatism, and extremism. Last year alone, the competent authorities of the SCO Member States have uncovered 288 crimes of terrorism. Pakistan having relevant counter-narcotic experience is now offering joint training sessions to SCO law enforcement agencies at the Academy of Anti-Narcotics Forces in Islamabad.

It is important to note that the SCO serves as an effective platform for the interconnectedness of national and regional integration initiatives, including the Eurasian Economic Union, “One Belt, One Road” initiative, and the economic development strategies of member states. Thus, the SCO can play an important role in the realization of the idea of forming the Greater Eurasian Partnership, a broad integration structure based on a network of regional associations and transcontinental projects.

He further mentioned that we attach importance to deepening ties in the sphere of tourism. Through the efforts of the Secretariat the project “Eight Wonders of SCO”, aimed at unlocking the cultural and tourist potential of the SCO countries is being implemented. Among them is the Mughal Legacy in the city of Lahore and we are confident that a presentation will also be held in Pakistan. Summing up his speech, he stressed that SCO’s international standing has grown considerably in recent years, and the Organization has secured its status as the leading multilateral structure in the region in the fight against terrorism, extremism, and drug trafficking.

In his remarks, Additional Foreign Secretary and National Coordinator for SCO Mr. Zahoor Ahmed highlighted the importance attached to SCO by Pakistan. He said that SCO’s objectives of regional cooperation and development were in complete harmony with Government of Pakistan’s foreign policy objectives. Pakistan considered SCO as a vital platform to forge closer ties with regional partners and enhance mutual understanding. of SCO provides various mechanisms and processes crucial for promoting multi-faceted linkages, connectivity and cooperation among the SCO member states. He also mentioned SCO’s significance as an important platform for realizing benefits of the emerging confluence of Belt and Road Initiative (BRI) and Eurasian Economic Union. Highlighting Pakistan’s role in SCO, Mr. Zahoor Ahmad specifically mentioned the significance of CPEC in the context of enhancing connectivity in the region and beyond. He also said that in order to share Pakistan’s rich experience in poverty alleviation initiatives, Pakistan had recently proposed the establishment of an SCO Joint Working Group and a Center of Excellence to discuss poverty alleviation in the SCO region. He lauded the efforts of SCO member states and the Secretariat in coordinating response to COVID-19 Pandemic. Mr. Zahoor Ahmad reiterated Pakistan’s active participation in all SCO mechanisms.

Major General Hafiz Masroor Ahmed (Retd), Vice President, Center for Global & Strategic Studies (CGSS), Islamabadpresented a detailed overview of the contributions by CGSS in regard to SCO. He stated that CGSS represents Pakistan at the SCO Think Tank platform. CGSS has organized various Seminars, Conferences related to SCO and is promoting SCO through its research and analysis. He stated that as the member of SCO, Pakistan is willing to, together with all parties, promote the building of community of shared future, a common home of security, stability, development and prosperity. Pakistan believes on consolidating solidarity and mutual trust, strengthening security cooperation, development strategies, deepening people-to-people and cultural exchanges and other aspects with the SCO member and observer states.

The session was attended by 200 participants and was also covered live on various social media platforms. The Webinar was moderated by Lt Col Khalid Taimur Akram (Retd), Executive Director, CGSS.