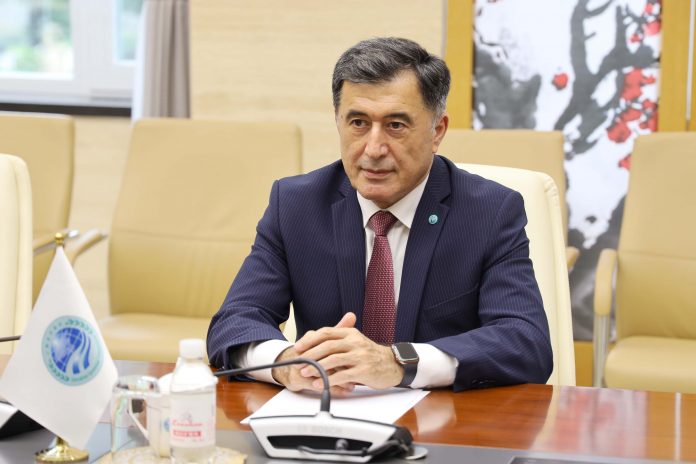 BEIJING (DNA) -The Secretary-General of SCO Vladimir Norov has said that 26 June is the International Day against Drug Abuse and Illicit Trafficking. The establishment of this remarkable date on 7 December 1987 by the decision of the 42ndsession of the UN General Assembly was an important step in securing the world drug problem on the global agenda. This day is of special importance for the Shanghai Cooperation Organization.

He said the problem of not medical consumption of drugs and psychotropic substances becomes increasingly relevant. According to the World report of the United Nations Office on Drugs and Crime for 2019, the number of persons using drugs was more than 270 million people at the age of 15-64 years (5.5% of the world population) that is 30% higher in comparison with 2009. The number of consumers of opioids alone grew up by 1.5 times between 2016-2017, reaching 53.4 million people. The income of the shadow market of drugs is estimated by about US $ 320 billion.

The threatening dynamics of drug trafficking and drug abuse in recent years have had a profound negative impact on virtually all spheres of society and the State, undermining the institutions, social foundations, and especially the gene pool of nations.

In the context of unprecedented openness of the modern world, when trade, economic and humanitarian ties between states, regions, enterprises and even individuals have been “streamed”, transnational criminal communities involved in the illegal production, smuggling and trade in drugs have also begun to take advantage of these opportunities.

Therefore, the way to a successful fight against drug trafficking lies not only in improving the efficiency of law enforcement structures but also in consolidating multilateral efforts of states through the exchange of experience, information, harmonization of legislation, national strategies, and approaches to solving this problem.

At present, it is safe to say that SCO is one of the authoritative regional associations involved in anti-drug issues. We have a common legal and regulatory framework and a flexible institutional framework for cooperation that covers all aspects of the anti-drug policy without exception, from joint operational and investigative activities to the implementation of a whole range of preventive, medical, and rehabilitation measures.

The three-tier mechanism of regular consultations of the competent bodies implements the updated SCO Anti-Drug Strategy and the Programme of Action for its implementation. Thanks to their joint work, up to 40% of the opium group drugs intercepted throughout Eurasia are withdrawn from the illegal trade.

At the same time, the interaction of the SCO member states on the anti-drug track is not standing still and is systematically adapting to new emerging challenges. This is especially noticeable against the background of the changes that are taking place in the illicit drug market under the conditions of the coronavirus pandemic. Above all, forced restrictive measures imposed by states have increased the already growing share of digital communication in society, which has consequently affected the channels for the sale and acquisition of drugs.

At the same time, practical responses to new risks are being developed. Particularly, more than 10 tons of narcotic drugs and psychotropic substances have been detained as a result of the last two SCO “Web” anti-drug operations aimed, inter alia, at interrupting the supply of synthetic drugs and countering the use of virtual payment systems in the drug business.

The priority for SCO is to curb drug trafficking from Afghanistan. Our states are forming a single barrier to fighting the global drug aggression, which threatens not only them, but also much more distant countries in Europe, North America, Africa, Australia, and Oceania.

Interaction with our Afghan partners is carried conducted through the SCO-Afghanistan Contact Group. At the same time, within the implementation of corresponding “Roadmap”, we intend to pay attention not only to issues of accumulation of law-enforcement potential but also to developing coordinated positions in promoting alternative development in Afghanistan.

Our contribution to global anti-drug efforts has received due international recognition. We have been one of the main regional partners of UNODC for almost 10 years now. The latest meetings of the Paris Pact initiative on cross-border cooperation and preventing the diversion of precursor chemicals were held with the assistance of the SCO Secretariat.

Besides, working contacts with CSTO, CIS, ASEAN, OSCE, and Interpol are being developed, including through mutual participation in relevant events.

At the same time, we are recording new trends in illegal drug smuggling. In particular, the suspension of international land and air traffic leads to a greater concentration of drug production within domestic markets, as well as to a shift of drug trafficking southwards towards shipping routes. In the first half of the year, Indian and Pakistani law enforcement agencies detained large quantities of drugs entering through ports. Also, drug trafficking from the Golden Triangle region, including India and China, continued. In this regard, we see prospects for expanding the horizons of our cooperation in the SCO-ASEAN-UNODC format.

I must stress that the SCO member states support the inviolability of the three UN anti-drug conventions, considering them as the cornerstone of the modern system of international drug control. We proceed from the imperative of strict compliance with their provisions, including regarding the use of narcotic drugs and psychotropic substances solely for medical and scientific purposes. At the same time, we regret to note that the current trends towards the legalization of cannabis for recreational purposes contribute to the erosion of established international anti-drug law. We fundamentally oppose calls for the legalization of drugs in violation of existing international legal obligations and fundamental human rights, including the right to life and health care.

We recall the importance of implementing the SCO concept adopted in 2018 on the prevention of the abuse of narcotic drugs and psychotropic substances to reduce the scale of the consequences of their illicit trafficking on public health and the security of society and the State. We intend to improve medical and rehabilitation care for people suffering from drug addiction, to carry out joint research and development work in the field of narcology, to develop new methods of chemical and toxicological analysis, and to improve methods of treatment for people suffering from drug addiction.