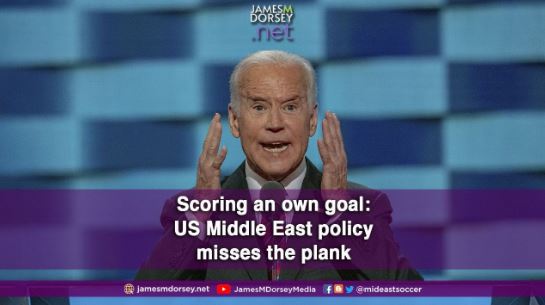 The Biden administration excels in scoring its own goals, nowhere more so than in the Middle East. Missed in the hype of Chinese President Xi Jinping’s recent visit to Saudi Arabia is that no part of the world lends itself more than the Middle East to put into practice the administration’s vision of a world in which the United States and China simultaneously cooperate and compete.

Yet, comparing the pomp and circumstance accorded Mr. Xi to the low-key, humbling reception of President Joe Biden when he went on a pilgrimage to Jeddah in July to repair legitimately strained relations with the kingdom demonstrates that US policy is backfiring.

Rather than ensuring a level playing field, US policy creates an opportunity for China.

“China is making a long-term play, both for its own sake, and to stymie and confuse American goals in Eurasia. China’s Middle Eastern arms sales, mooted military bases, and yuan-denominated futures contracts and purchases bring military and financial dimensions to Sino-US competition in the Gulf. The US is not prepared for this challenge,” said scholar Lucille Greer in a just published book.

To be sure, bad blood plays a role in US-Saudi troubles.

Saudi Crown Prince Mohammed bin Salman will not forgive Mr. Biden for publicly holding him responsible for the 2018 killing of journalist Jamal Khashoggi, albeit in word rather than deed, and for the optics of the administration’s harsh verbal response to the kingdom’s refusal to push OPEC+, the cartel of oil-producing countries plus Russia, to increase production.

Even so, the Xi visit, despite long-term Chinese ambitions, was as much about strengthening the Gulf’s hand in demanding clarity on the future US commitment to Gulf security and wanting to formalise arrangements as it was about China capitalising politically and economically on strains in US-Saudi relations.

Gulf security is a Chinese, not just a Gulf interest, with the region meeting more than half of China’s oil and gas needs. In other words, China, unwilling and unable to replace the United States anytime soon, is as interested as Gulf states in ending uncertainty about US reliability as a security guarantor.

Given the personal animosity between Messrs. Bin Salman and Biden, Saudi Arabia has left it primarily to the United Arab Emirates to spell out what the Gulf wants from the United States.

Speaking three weeks before the Chinese leader’s visit, Anwar Gargash, the diplomatic adviser of United Arab Emirates President Mohammed bin Zayed, insisted that “our primary strategic security relationship remains unequivocally with the United States… Yet, it is vital that we find a way to ensure that we can rely on this relationship for decades to come through clear, codified, and unambivalent commitments.”

In response, the United States will have to do more than lay down red lines regarding networks and critical infrastructure like senior Pentagon official Colin Kahl did at a recent security conference in Bahrain.

To bridge the growing trust gap, the United States will have to respond in positive and confidence-inspiring terms to Mr. Gargash’s demand.

Mr. Xi demonstrated his understanding of the efficacy of being attentive to Gulf concerns when he agreed during his visit to a joint statement that stressed the need to “strengthen joint cooperation to ensure the peaceful nature of Iran’s nuclear program” and for Iran to respect “principles of good neighbourliness.”

The acknowledgement was in line with Chinese policy but served as a reassurance to Saudi Arabia given China’s close relations with Iran.

Saudi Arabia worries about an Iran that potentially is a threshold nuclear power and supports non-state militias in various Middle Eastern countries.

To be sure, the United States has long confronted Iranian ambitions.

Nevertheless, the United States has an interest in being explicit rather than implicit in its response to the demand articulated by Mr. Gargash, even if that may be a political hot potato in Washington.

Since the days of President Barak Obama, the US has fuelled doubts by its talk of a ‘pivot to Asia’ and Mr. Biden’s focus on the Indo-Pacific.

It takes a cursory look at a map to recognise that there is no viable Indo-Pacific strategy that does not include its western flank, the Arabian Sea.

With the Gulf, the United States, and China in fundamental agreement on maintaining the Middle East’s current security architecture, Chinese military sales, nuclear cooperation, and technology, particularly its nuclear, military, and dual-purpose applications, are likely to be major frontlines in regional US-Chinese competition.

That didn’t prevent Huawei Technologies from signing an agreement during Mr. Xi’ visit related to cloud computing, data centres and building high-tech complexes in Saudi cities, despite US warnings that networks and equipment produced by Chinese companies like Huawei

could contain technologies to gather intelligence that are embedded in ways that make them undetectable.

While the US dominates militarily in the competition with China as the Gulf’s primary weapons supplier, it has yet to find an effective way in leveraging its advantage.

To a degree, the US is hobbled by its justified conditions on sales that have stopped it from selling to Saudi Arabia cutting-edge killer drones and ballistic missiles – areas where Chinese weaponry has made inroads in the kingdom.

Even so, the United States has trump cards it can play.

Beyond the agreement that the United States has a primary role to play and arms sales, it’s the United States rather than China that is helping Saudi Arabia complete an overhaul of its defense and national security architecture, the most radical military reform since the creation of the kingdom in 1932.

The reforms aim to enable the kingdom to defend itself, absorb and utilize US weapons systems, and make meaningful military and defense contributions to regional security, according to political-military analyst and former Pentagon official Bilal Y. Saab.

“Through the vehicle of defense reform, the Biden administration has an opportunity to engage the Saudis on critical national security matters while safeguarding US strategic interests and honouring American values,” Mr. Saab said.

“It’s a wise form of US assistance that isn’t politically controversial, doesn’t cost much US taxpayer money, and doesn’t require a significant US presence on the ground. It is perhaps the only way to reset the currently tense relationship by gradually rebuilding trust between the two sides,” Mr. Saab concluded in a detailed study.

So far, the US assistance has continued uninterrupted despite the strains in the relationship.

However, to put the relationship back on an even keel and secure greater Saudi and Gulf sensitivity to US concerns, the United States will have to find a way to offer Gulf states the clarity and commitment they need in politically feasible ways at home.

That could be easier said than done with an administration that often portrays an increasingly complex world in binary black-and-white terms.