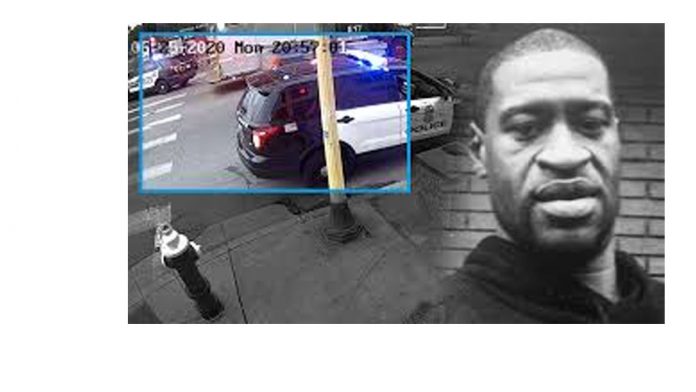 George Floyd died an excruciating death at the hands of his tormentors who were supposedly his protectors. Police officer, who suffocated George to death was filmed by some bystanders and now the whole world is protesting. It was indeed a very gory act by someone who wears a uniform and takes an oath to protect the civilian life in the discharge of his duties. But this death also highlights one very disturbing fact of the global politics and media affairs.

It is that the worth of lives are classified on the colour of skin, sadly. George, a black man, was a minority person in the racially divided American society. Minority can take several forms and the colour of the skin is one of many including ethnicity, faith, etc.

Not that one is underplaying the severity of the crime against George, but I am puzzled about the selective reaction of the world. All human rights violations and the use of brutal force against minorities should be equally condemnable. Isn’t it surprising that when a racial minority is treated badly in the richest state of the world, the conscious of the whole world is animated instantly and global protests erupt? But similar reactions are not witnessed when minorities are killed and tortured day in and day out for over 70 years in Indian occupied Kashmir and there is deafening silence. Why is the moral compass of the world so selective in pointing out violations?

Kashmir and Palestine are the oldest military occupations in the world. Ironically, Muslims are suffering the wrath of occupation forces in both cases. These occupations are internationally recognized and condemned by the United Nations and there are tons of evidences and heaps of useless resolutions pointing to global inaction. Both these occupations are brutal, atrocious, and have a genocidal thread in the tactics employed by occupation forces. Sufferings of Muslims in both the cases without rousing the world consciousness is a disturbing phenomenon.

Kashmir is under occupation for 75 years and holds the record for the longest occupation, beating Palestine by a year. Kashmiris rose to demand their right of self-determination, promised by the UN Security Council, in 1988 and have never returned to normal life ever since. India resorted to ruthless application of force to stem the democratic demand of Kashmiris. But Indian brutalities touched a new peak when in August 2019, the Indian government, led by an extremist rightwing party which holds Hinduvta very dear and closer to their heart, imposed the harshest lockdown in human history, turning Kashmir into a largest open-air prison. A population of nearly 12 million, Kashmir is occupied by nearly 400,000 Indian security forces imposing one of the most brutal and crippling curfews. One soldier to every 30 residents is very heavy militarization by any standards. And all this was done in the name of amending the constitutional provisions governing Kashmir. How strange that you amend the constitution through guns and torture and still call yourself a democracy? Amending the constitution is a democratic exercise, taken by elected representatives of people with the consent of the masses. Indian action of August 2019 violates basic democratic logic. If a country has to deploy half a million soldiers in anticipation of street protests against the constitutional amendment, then the very nature of the amendment is undemocratic and against the will of the people.

From August last year to this day, the Sun has risen over 300 times but the long dark night, cast over Kashmir is still staying. Indian occupation has crippled Kashmir’s economy before the world even knew Covid-19 and consequent lockdowns. Kashmir is literally cut off from rest of India and the world physically, socially and econommically since all means of communication are totally suspended. No telephones, no cellular, no internet at all.

This 11-month-long harsh lockdown has crippled Kashmir economically and wreaked havoc socially and tormented every segment of the population. Sick died due to a lack of medical care and a shortage of essential medicines. Students missed their academic year and have an uncertain future. Kashmir lives on tourism and agriculture. Fruits are the major product of Kashmir. Lockdown forced farmers to see their year-long toil rot in front of their eyes, with the remotest chance of compensation. What would be the mental state of a person who has undergone such traumatic experience? But surely, no one would be concerned since Kashmiris are the sons of the lesser gods.

All violence is bad. State repression in any form is worse. George’s death is the latest testimony to the unchecked use of lethal force by law enforcement personnel. All reputable international human rights watch groups and organizations have accumulated loads of evidence against Indian security forces, with graphic details of atrocities and torture. IOK holds an exclusive, though disgraceful distinction where rape is used as state policy to suppress democratic dissent. UNHCR, Amnesty International, and innumerable other bodies have collected verifiable evidence of using illegal practices against civilians which include the use of pallet guns and enforced disappearances. Worst, Indian occupation forces have resorted to collective punishment in Kashmir which is a war crime under 1949 Geneva Conventions.

State is a responsible actor and it works within legal bounds. There are international conventions that explicitly prescribe how states can fight insurgency. India holds another terrible world record of being home to highest number of active insurgencies in single country. There are currently plus of a dozen active insurgencies in India. So much for Indian democracy! With so many insurgencies, Indian forces should have been the best trained to fight insurgencies. Opposite is however true. Indians have only resorted to the use of maximum force as a favoured tool to fight back insurgents. Indian record of minority rights violation is so awful that USCIRF (United States Commission on International Religious Freedom) has placed India on its watch list for basic rights abuses. That’s not how a world expects a responsible state to act. Or, perhaps we are expecting too much from a saffron-clad state. A state which razed and bombed the holiest shrine of Sikhs in the name of fighting few lightly armed Sikh dissidents.

Death of George Floyd has given awakening to the world conscious that all forms of torture and highhandedness by state security apparatus is repulsive and must stop forthwith. Protestors have voted with their feet. Its high time world also pays attention to the oldest and bloodiest occupation on the planet and finds solutions in line with resolutions of the United Nations. Any principle which is true for sacredness of American lives should also be applied with the same spirit for protection of the properties and lives of people of other faiths and ethnicities.