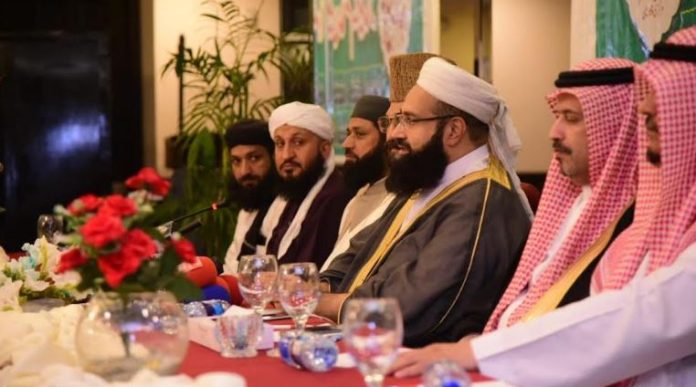 Ulemas-Mashaykh of different religious schools of thought of Pakistan, ambassadors of Muslim countries  and international organizations have strongly condemned blasphemous comments and atrocities at Muslims and minorities in India,  and also demanded the arrest of the perpetrators.

immediate practical steps against the atrocities of India and Israel and to ensure legislation through UNO for sanctity of heavenly religions and prophets.

The joint declaration noted that in Friday sermons on 17th June 2022, the Friday Congregations will deliver sermons on the topic of Hurmat-e-Rasool (S.A.W) against the blasphemous comments and atrocities at Muslims and minorities in India.

The declaration of the seminar said that internal and domestic peace and stability of Pakistan strengthens the Muslim Ummah.

The declaration of the seminar appeals to all political and religious leaders of Pakistan to resolve issues through dialogue and negotiations.

It was also noted that

The declaration issued at seminar also  stated that India and Israel were involved in spreading chaos in Pakistan and accomplice in campaigning against Pakistan’s security agencies through social media.

Pakistan’s political and religious leaders and the young generation of Pakistan must respond to the anti-Pakistan campaigning on social media.

The declaration also called on the Organization of Islamic Cooperation (OIC) and the United Nations to take immediate action against the atrocities committed against Muslims and  minorities in India and to put pressure on the Indian government to arrest the perpetrators of blasphemy and to seek apology at state level on blasphemous comments from leaders of India’s ruling party.

The declaration also termed stance of the  Prime Minister of Pakistan Mian Shahbaz Sharif on blasphemy as a representation of the Muslim Ummah and the stance of the Muslim Ummah adding that just as the former government of Pakistan had adopted  a joint resolution on Islamophobia in the Organization of Islamic Cooperation and the very resolution later approved from General Assembly.

Similarly, a meeting of the OIC Council of Foreign Ministers should be convened immediately on blasphemy issue with objectives to take the practical steps against blasphemous comments in India against Hurmat-e-Rasool (S.A.W).

The declaration also said that protection of the rights of non-Muslims living in Pakistan is the responsibility of Muslims.

No individual, group or organisation in Pakistan will be allowed to usurp the rights of non-Muslims of Pakistan.

The misuse of blasphemy law has come to an end in Pakistan and we will continue to play our role to make Pakistan stronger through mutual unity.

In another resolution adopted  at the seminar, thanked the leaders of all Islamic countries, including the Organization of Islamic Cooperation, Rabita-e-Alam-e-Islami, Pakistan Ulema Council, Sheikh Al-Azhar, Mufti-e-Azam Oman, Minister of Religious Affairs Kuwait, Mufti-e-Azam of Saudi Arabia.

Chairman Pakistan Ulema Council and Special Representative of the Prime Minister of Pakistan for Interfaith Harmony and Middle East Hafiz Muhammad Tahir Mehmood Ashrafi also announced that at the end of the June,

a Virtual Conference will be held with key leaders of Islamic world, in which decisions will be made on Toheen-e-Namoose-e-Risalat (S.A.W), Islamophobia and prevailing issues of Muslim Ummah.

International Message of Islam Conference will be held on August 8-9 in Islamabad.

It will be attended by the Imam-e-Kaaba, Qazi al-Quza Palestine and important leaders of the Islamic world.