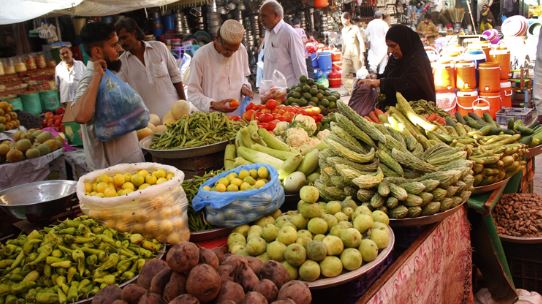 ISLAMABAD, OCT 1: Inflation measured by the Consumer Price Index (CPI) reduced slightly to 23.18 per cent year-on-year in September, data released by the Pakistan Bureau of Statistics (PBS) showed on Saturday.

Inflation in September was driven by a double-digit increase in almost all sub-indices, especially transport and perishable food items.

According to the PBS, in September, urban and rural inflation increased to 21.2pc and 26.12pc year-on-year, respectively.

PBS data showed that top commodities contributing to YoY inflation included tomatoes which saw over 128pc rise, pulse Masoor which saw rates rise by more than 78pc and motor fuel which increased by up to 90pc.

Last month, analysts had told that inflation was expected to slow down from its decades-high level following more than a one-third drop in international oil prices since June.

In its Monthly Economic Update and Outlook for September, the finance ministry said Pakistan was facing a severe economic and humanitarian crisis due to the devastating floods this year.

The government was alleviating the effects of the rupee’s depreciation and agricultural destruction by prompt measures, including countering price speculation and providing sufficient supplies by allowing trade from neighbouring countries, it said.

“Still, the risk of second-round effects of recent inflationary shocks persists which may work themselves through the markets. It can also be observed that in recent years, the month of August shows a positive seasonality in the MoM (month-on-month) inflation rate. All in all, September may show a halt to the recent drastic accelerations of the YoY inflation rate,” it added.