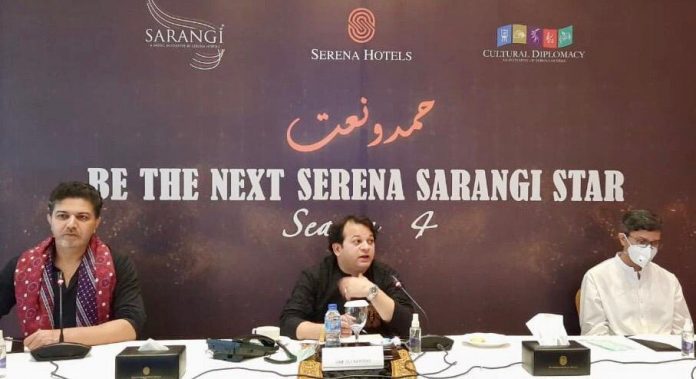 Despite COVID-19 challenges, Serena Hotels continue to use the digital platform in engaging the community through their various initiatives. It  has recently concluded Season 4 of its nationwide music talent hunt platform “Sarangi”, whose theme this year was “Hamd-O-Naat”, with the jury announcing the winners of the competition online.

Hamd is exclusive praise to Allah and Allah Alone whereas Naat is praises to the last Prophet Hazart Muhammad P.B.U.H

Sarangi is one of Serena Hotels’ cultural diplomacy initiatives that aims to foster the rich cultural heritage of the country and promote arts and activities that inspire peace and hope. Over the years it has become a powerful platform that gives hitherto undiscovered musical talent from around the country the chance to step forward by sending a sample of their performance online, to be discovered and polished by the professionals in the music industry.

This year’s competition, which kicked off at the beginning of Ramadan, received more than 150 submissions from promising vocal talent in the art of Hamd and Naat from all over the country.

The end of season judging event for Serena Sarangi Competition is usually a star-studded affair, however due to Covid-19 the event had to be held in a limited setting with the participants showcasing their talent via video link. However, the quality of the competitors made up for this and the juryconsisting of Sufi folk maestro Arieb Azhar, legendary Qawwal Asif Ali Santoo and leading music producer Sarmad Ghafoor, found it difficult to pick a single winner.

Osaid Alam, an FSc. from Punjab College of IT, was picked as one of the winners. Inspired by world renowned Naatkhwan Syed Zabeeb Masood Shah, Osaid started reciting Naats from a young age. He wasmentored by his teacher Syed Manzoor Ul Konain Shah who helped him polish his talent and passion and won a number of Provincial and National Naat competitions to-date.

Another winner was Ayesha Rasheed, a doctorate student from University of Punjab who said her powerful vocals and Sufi singing style are inspired by Abida Perveen. Ayesha hasalready won a number district and national level accolades since her young age for SufiSinging and Kalaam, including Kalam e Iqbal competition held by Iqbal Academy and Unique Drama Festival Lahore.

The third winner was Ayesha Tariq, a 17-year-old second year student from Lahore passionate about Hamd-o-Naat and SufiGhazals.

“It would be unfair for us to single out one winner as three of the finalists were at par with their skills, hence we have decided to award all three as co-winners,” said Asif Ali Santoo, while extending warm congrats to the winners.

The winners received acertificate and cash prize which will be divided equally. They will also each receive a recording session on Serena Sarangi Nights, an online live music initiative by Serena Hotels which is broadcast around the world.