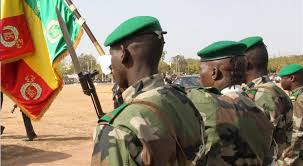 Nine other soldiers were wounded, five of them seriously, amid a long exchange of fire with armed groups.

BANDIAGARA: Nine soldiers have been killed in an attack near the central Malian town of Bandiagara, in an area where armed groups are rampant, a military official has said.

Army and local officials had earlier spoken of a death toll of eight in the attack on a gendarmerie post which took place on Thursday night.

Nine Malian soldiers were also wounded, five of them seriously, according to a military official who declined to be named.

A local official also said there was a long exchange of fire with a large number of fighters.

Mali has been plagued by a brutal conflict that began as a separatist movement in the north but devolved into a multitude of armed groups jockeying for control in the country’s central and northern regions.

The insecurity has spread across the arid scrublands of the Sahel, into Burkina Faso and Niger, with groups exploiting the poverty of marginalised communities and inflaming tensions between ethnic groups.

The region has seen a string of deadly attacks since the start of the year, including a roadside bomb that killed four United Nations peacekeepers from the Ivory Coast.

French and Malian troops have also carried out a joint mission in the area, called Operation Eclipse. According to a Malian army statement on January 26, “100 terrorists were neutralized” in the operation.