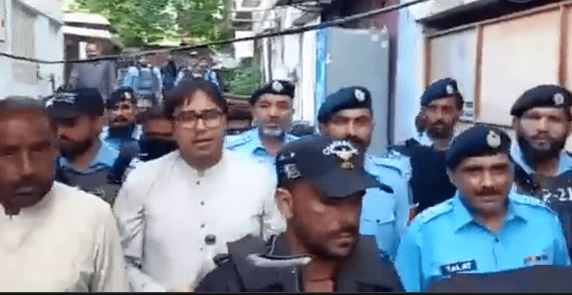 Islamabad Police has left the jail with Gill as Punjab Police personnel returned back after hours-long drama outside the jail premises. It was further learnt that Gill will be first taken to PIMS for a medical checkup.

Gill’s custody has been given to Islamabad Police according to the directions of the court. Sources in the police said that he will be shifted to a police station after the medical examination.

Earlier, sources, citing a document titled ‘Emergency Shifting’ available with Geo News, said that after Gill’s checkup the doctors of the Adiala jail and the authorities concerned were directed to shift the PTI leader to DHQ Hospital Rawalpindi.

Following the directions, Islamabad Police and Rawalpindi Police had reached the Adiala jail to shift Gill; however, he refused to go with the former. This led to hours-long drama between the two law enforcement agencies.

The Rawalpindi Police was adamant about shifting Gill to DHQ Hospital while Islamabad Police insisted on transferring the PTI leader to the federal capital as per court orders. Following the argument, additional personnel of Islamabad Police were called to the jail.

According to sources in jail, it was learnt that Gill had complained of difficulty in breathing and ill health due to alleged torture after which he was shifted to the jail hospital for a checkup.

Meanwhile, the sources had said that PTI Chairperson Imran Khan had ordered Gill to create an emergency-like situation so that he could be transferred to the hospital.

Meanwhile, after reports of the worsening situation, the Ministry of Interior had also summoned Rangers and FC to execute the court orders.